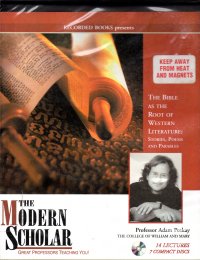 So I had expected to listen to this course, one from my personal library, on trips to St. Charles or the trip from Springfield to Poplar Bluff to St. Charles to Springfield that I’d planned to take last month, but unfortunately, I did not get that travel time, so I’ve been listening to it in fits and starts in my back-up truck.

And, to be honest, I was not making excuses to drive the truck just to listen to more of the course.

The course looks at parts of the Bible in the context of genre literature, whether it’s because the part of the Bible being examined is part of that genre or tradition or because other works in the genre might have their roots or allusions to Bible parts.

The course overlaps enough with The History of the Bible: The Making of the New Testament Canon that it felt almost like a reprise at times. Some of the connections to modern (or at least more recent) literature seemed a bit thin, but perhaps I’ve already studied enough literature and its biblical allusions that it wasn’t fresh.

I guess I got the most out of the penultimate lecture on the spirit versus the letter of the law. So I did get something out of it, but that’s only a little out of, what, eight or ten hours of listening?

Probably I am being too hard on it; surely, repetition of things I’ve already heard or learned solidified it in my mind a bit, but it’s not as stark or startling (or pleasing) as completely new information.

So what I’ve said about the audio courses I listen true holds: The more it aligns with the fields I’ve studied / read a lot of already (English literature, philosophy), the less I actually get out of it or the more bored I am with it. The audio courses I like the most are the ones that teach me the most I don’t know. Unfortunately, in the past, I’ve tended to pick those very courses that will bore me up at library book sales and whatnot. Well, I did, until I discovered the secret. Now I look for courses in interesting disciplines that I don’t have a degree in, or I get them from the library, and I get more from them.

And the vast library of courses I already own, these I shuffle in from time to time.

So, do I recommend it? If you’re not already versed in the material, it might be worth your time. Or if you have a long commute or lots of time in the car and need something besides the desiccated playlists of modern FM radio.