So I got a mailer a couple months back for the Audubon Society, and I signed up as a member. I have many, well, a couple memories of the Audubon Center near Milwaukee. My father took us there from time to time; I remember the ranger/caretaker’s name was Randy. He had a son a bit younger than us named Troy, I think, and I even remember attending a Christmas party at their home which was on-site. Well, I think I remember these things, anyway. Who knows what I remember and what I make up any more.

So I joined because I support conservation efforts. I’m often a member at the local national park (well, battlefield). I’ve been a member of Ducks Unlimited for many years. I’ve sent money to the Arbor Day Foundation off and on.

But then I got my first Audubon magazine. 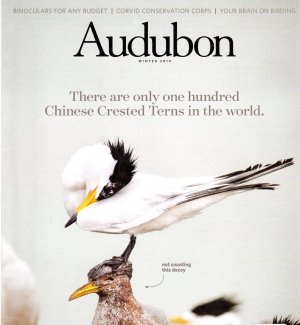 The editor’s column has a picture of the US Capitol building behind it. It has an interview with Margaret Atwood. And just about every article in the magazine is about how climate change is destroying birds’ habitat.

So it’s morphed into more of an advocacy and lobbying organization judging by the magazine articles rather than a conservation organization, although if I went to more Audubon Centers, perhaps I would get a better sense of on-the-ground (and in-the-air) work they’re doing instead of beating the drum for climate change.

The Ducks Unlimited magazine, by contrast, does talk about conservation and getting the government more involved, but it overwhelmingly contains articles about duck hunting. Which is what it’s for: conserving wetlands so we’ll have ducks in the future. The Arbor Day Foundation newsletter has information about trees. But Audubon seems focused on climate change and action/compulsion necessary to prevent it.

So I’ll probably let my membership lapse in a year. And if I want pictures and articles of birds, I’ll resubscribe to Birds and Blooms