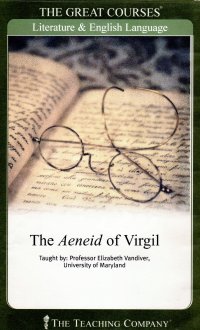 This audio course, I wish to remind you, gentle reader, cost me a mere fifty cents at the recent Friends of the Springfield-Greene County book sale because it is on audiocassette. I, dear reader, have an audio cassette player in my truck, so I can still enjoy audio courses and books on tape (literally). And when they’re fifty cents, I enjoy them ever so much more.

This book covers, in twelve lectures (roughly six hours), The Aeneid, Virgil’s epic poem about how Aeneas escapes the sack of Troy, sails the Mediterranean, settles in Italy, and eventually wins a war with the Latins to found Rome. It’s a poem chock full of Roman gods interference, much like The Illiad and The Odyssey–to which Virgil’s master work owes a great depth. In addition to reviewing the books in the poem for plot points and character, four of the lectures provide context to when it was written, its influences, and its position in the canon.

The professor recommends you read along once the lectures get into the meat of the poem. I did not, though, as was driving and listened to a number of the lectures back to back. I am not sure that I even have a copy of Aeneid–certainly I must, with all the Classics Club editions and Harvard Classic books that I have lying around. Well, standing cheek-to-jowl on the to-read shelves of Nogglestead, anyway.

I did get a better, fresher sense of the structure and the incidents in the piece, though, and I hope I can retain them. That Aeneas recounts his escape from Troy whilst in Carthage, talking to Dido; their love affair, broken when the gods remind him of his duty to found a new city; his trip to Sicily, the underworld, and finally to Italy; and the war with the Latins over the hand of Livinia.

The book made me want to read it–and “re”-read The Illiad and The Odysessey–I am not sure I read them in translated poem form, but I have probably read them in adapted prose somewhere along the line. However, given how I bog down with long poems, it probably won’t be any time soon, unfortunately.

1 thought on “On The Aeneid of Virgil by Professor Elizabeth Vandiver (1999, ?)”