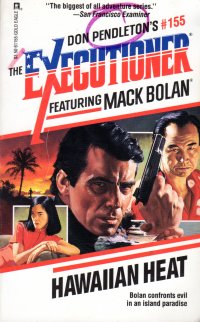 Sixteen years after Hawaiian Hellground, Bolan returns to Hawaii to rescue comrade and comedian Tommy Anders from a Chinese triad that’s holding him hostage because he’s building up a network of Chinese and Japanese business people who are tired of paying of their countrymen.

So Bolan gets involved to help the businessmen disrupt the Triads and Yakuza who are co-existing on the islands, with a precarious truce as long as the organized crime people stick to their ethnic constituencies. As part of his plan, Bolan nudges them toward a full scale war as long as he can protect the innocent.

So I can see the plot as outlined, and it could have been handled better. Some of these later books must have had more elaborate plots, perhaps more in line with the Super Bolan titles, as the page count increases, but some of the authors don’t execute them as well. In this book, it looks like the author was used to the old 180 page limit. The action moves from set piece to set piece fairly well, but you can kind of see where some plot points are left unaddressed or just mentioned in passing.

The book contains a couple of tactical problems. Of course, everyone has a different kind of gun, again, which means no one can swap ammo if needed. And he carries two spare magazines for a combat assault. Cmon, man. Kim du Toit takes two spare magazines to the bathroom. Also, Bolan takes “cover” behind a couch. It’s a heavy couch, the text says, but, this is the 21st century–we all know the difference between concealment and cover, ainna? I wonder if kids these days steeped in first person shooters could write more intelligently about military tactics and concepts. But probably not the “everyone has a different gun” thing.

Ah, well. It’s not Shakepeare. It was a quick, enjoyable read. Not as good as Firebase Florida, but not bad enough to put me off the novels for a while. I kind of think I’m on a tear here; I am down to 18 titles in the Executioner series. With “dilligence,” I could finish them by the end of next year. However, I would still have dozens of related paperbacks to go, not to mention thousands of other better things to read. So I won’t predict or promise that I’ll finish them out any time soon, gentle reader–you still have several years of intermittent Executioner book reports to look forward to.