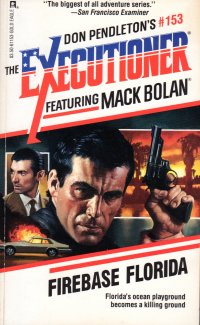 You know, gentle reader, for the last couple of weeks, most of my reading has been poetry, art monographs, travel books, and Christian self-help kinds of books (we’ll get to those by and by). Given the sheer number of those books that I’ve polished off in the last couple of weeks, it seems like a long time since I read any fiction (it’s not–I read The Widening Gyre only two weeks ago, but that was a dislocated finger and Exposure Notification ago). And it’s only been two months since I read the previous entry in the series (Combat Stretch). Still, it felt a bit refreshing. Maybe this is actually a better entry in this part of the series. Who can tell?

At any rate, Mack Bolan is summoned to Florida because some of the Cuban immigrants are setting up a crime syndicate, aided perhaps by the Cuban secret police. Thirty years after the revolution, some of the first generation refugees are happy with the lives they’ve built in Florida, but some of their children dream of returning to Cuba triumphantly. The police detective who summoned Bolan wants him to act as a mentor to these second generation warriors who have amassed a small arsenal of their own. However, when Bolan starts his probing and hitting, an expert team of hitters from New York comes to take care of him and a Cuban strike team comes to take care of the young second generation soldados.

It moves along well with the set pieces where Bolan is hitting the various criminal locations with only a few “he shot someone how far with a shotgun?” moments. All right, a few howlers: Selecting Ingrams and Uzis instead of rifles as the weapon of choice, and later shooting down two Mi-24 Hinds with the aforementioned small arms. I mean, I had trouble in 1987 playing Gunship winning against Hinds whilst flying a freaking Apache, for crying out loud–remember flight simulators, how you could sort of realistically fly real aircraft on computers before 2001?

At any rate, I enjoyed the book but for the usual flaws I complain about in the better books in the series: It gets well developed for 150 pages, and then the author remembers he’s running out of words, so the remainder of the outline gets short shrift. The stage gets littered with corpses: the soldados, the police detective and his wife, and the love interest die, Bolan hits a military commander’s house in Cuba, and Bolan hits the Cuban immigrant mobster’s fortified island, and finis.

A too quick resolution, but at least it didn’t go on too long, I suppose.

So I might not have finished these books yet, but I get ever closer, and I kind of want to read the next in my set. I’ll likely be disappointed, of course, which is how I end up with an average time between entries in the series: I read bad books really quickly after the good ones, and then I read the good ones after a longer gap following the lesser ones.