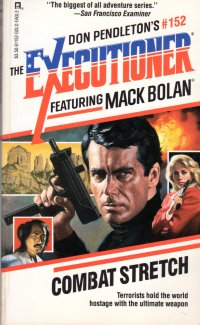 Not longer after finishing the Medellín trilogy with Message to Medellín a week or so ago, I jumped back into the Executioner one-offs with this volume.

An interesting thing I discovered when researching the trilogy: Although the trilogy is numbers 149, 150, and 151 in the numbering, the numbering on Fantastic Fiction and in the front of the books indicates that #150 in the series is Death Load. Which makes me wonder how that happened. Was the middle book in the trilogy only available to subscribers? Who knows. Well, someone probably knows. Actually, Wikipedia says Death Load was in the main line and Evil Kingdom was in the Super Bolan line. Which probably explains why it was longer than the mainline. The copy I have of Evil Kingdom does not indicate Super Bolan at all. I wonder if that makes it a collector’s edition.

Sorry, that’s more about the series than this book. Don’t I decry series business over the individual books in my book reports? I do!

This book has Bolan working with a beautiful KGB agent to find a Japanese terrorist organization which has a super typhus that it threatens to release unless its demands are met. The KGB agent has another objective: To steal the bioweapon for the Soviet Union and kill Bolan.

In a series of set pieces, Bolan and the Russian track and engage elements of the organization at the safe houses where they’ve stored the bioweapon for dispersal. In one of the firefights, the good buys are exposed and have 72 hours to find the main stronghold and find an antitoxin before they become infectious and need to be quarantined. They find the stronghold, discover the kidnapped scientist who has already discovered the antitoxin, and get saved with thirteen minutes to spare–and the beautiful Russian agent has fallen in love with Bolan and cannot kill him, so her superior who is in love with her shows up and is disappointed.

So it’s not a bad entry in the series, but it does have some errata. At one point, Bolan discovers that the Russian agent is to poison his granola bars with arsenic using the nuts to cover the scent of almonds. As any Agatha Christie reader can tell you, arsenic doesn’t smell like almonds–cyanide does. And when teams kit up for battle, they all end up with different weapons again. I guess in a post-apocalyptic scenario, this might occur as gun collectors emerge with different guns in their collectons.

Aside from the little mistakes, not a bad entry in the series. Fear of bioweapons is as timely as ever, ainna?