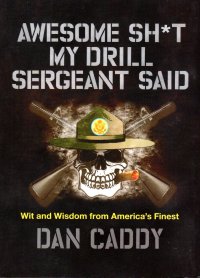 I forget where I saw this book listed most recently on the Internet, but I bought a copy for my former Marine brother and a copy for myself. As I had just finished an Executioner novel (Combat Stretch), I thought I would pick up something quick to read before jumping into another novel. Not that I’m reading long novels recently.

At any rate, it’s what you would expect: A couple of longer stories (which are a couple paragraphs long) interspersed against single-quotation-on-a-page sections. A lot of insults, some of which we civilians can appropriate.

As you know, gentle reader, I did not serve, but I come from a military family (Marines, not army). So I recognized at least one story–the candy bar in the toilet–that my father’s drill sergeant had done. So that’s been around a while. And I realized that I knew my mother’s boot camp nickname, but not my father’s–one assumes he had one.

I have seen a lot of ASMDSS t-shirts listed on my Facebook feed; now I know what it means.

So a quick read to be sure, and amusing enough if you’re the kind of person who likes the novels of Richard Marcinko. And maybe wonders if he regrets not signing up back when three or four years of military service sounded like a long committment, but four years of college and a decade’s worth of student loans did not.