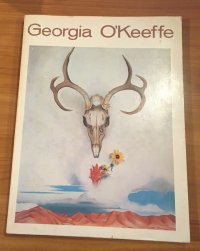 I bought this book in June at ABC Books; of the seven books I bought that day, I have now read/browsed six. So it is possible that for a second year in a row, I will finish all of the books that I bought on one trip to a book store in the same year I bought them. But that’s not actually certain.

At any rate, I had not really paid much attention to her work. I knew she had a reputation for being gay, although that is in dispute, and that a lot of people see vaginas in her flowers. I think I confused her with Grandma Moses when I was young, as she was still alive but was very, very old–both she and Grandma Moses lived to about the century mark (Grandma Moses a little older, Georgia O’Keeffe a little younger). And both of their names started with G, which means to a young man not steeped in the arts, they were practically the same person.

So. Georgia O’Keeffe. She’s a little modern for my tastes, but she paints in sharp lines and bright colors, so I rank her higher than Matisse, Picasso, and the post Impressionists–even Americans like William Partride Burpee. Some of the landscapes/buildings have wavy lines where I would have preferred them straight. I like a couple of her New York series, but I’m not fond of the landscapes with the floating skulls. The more abstract work and some of the stylized flowers, meh.

Still, I’m glad to have reviewed this monograph (for which I paid TEN WHOLE DOLLARS) to increase my familiarity with her work and make me slightly more intelligent of art.