Saturday, I went fishing with my boys. They, or at least the younger one, have/has been eager to go fishing again as it’s not our native thing, but the youngest really likes the thought of catching a fish and eating it.

They’ve gone a couple times with their school classes to ponds and had some luck there, and we went a couple years ago on a guided fishing trip that my beautiful wife got me/us for Christmas. With a professional guide, we caught fish all day–the first bite came before the guide had baited the second hook. We only caught a single bluegill that was large enough to keep–all the bass were the wrong size to take home–and we threw the bluegill back because one bluegill does not an appetizer make.

But they’ve had some high expectations to what fishing is. In their minds, fishing is mostly catching fish. The video game representations of the same task are equally rewarding.

When I have taken the boys, we have not had as much success. On a visit to Big Cedar Lodge two years ago, they brought the fishing rods that their Uncle Kevin had given them and I rented a rig. We fished from a dock. And by “We fished,” I mean that they snarled their lines in the open reels and lost their bait and a bunch of things that left me sitting on the dock untangling things and putting new hooks and bait on until they got bored and went wading while I “fished” for a bit, but nothing was biting. It turns out that one of the boys had an old iPhone in his pocket while wading, which ruined he gaming device. And when we left Big Cedar, we left the fishing rods because the boys put them in the closet, forgot them, and when doing the final room inspections, I did not look in the corners of the closet not immediately visible and did not think to look for fishing rods which are not part of our standard vacation equipment. So that was a particularly unlucky fishing trip.

At any rate, as the summer is winding down (how did that happen?), I wanted to take the boys fishing before school begins (if it begins). On Friday, I hit the local sporting goods store for some cheap fishing tackle (and some free weights since the YMCA still has squirrelly Wuhan flu rules in effect–but the shop was all out of free weights and rifles as well as all-in-one fishing rod kits). I bought some artificial bait as well in case we did not pass a bait shop and could not dig up our own bait. We tried gathering our own worms from Nogglestead, but the boys must have said “fishing” too loud as we could find none either in the evening or the morning. In the spring, we stumble over them all the time, but here in the heat of the Ozarks summer, perhaps they hide deeper. Larry Dablemont could tell me.

So we headed down to Lake Springfield to throw our lines in. We started out by the boat house but threw our lines in a marshy area. Well, the boys did. The youngest, on his first cast, forgot to reel a bit after throwing the line out to set the brake, so his line kept feeding until he had a good tangle. So I sat untangling the line a bit to save as much as possible before cutting it and putting the hook and a new sinker on the untangled line. The other snagged something on the bottom and couldn’t get it off, so when I handed the rod to the youngest, I cut the line for the oldest and added a new hook and sinker to his line.

After a couple of minutes, we decided to ask a ranger at the boathouse where to fish. He recommended three places: One about twenty yards to the left of where we had been fishing, a set of docks across the lake, and a boat launch by the power plant. We settled on the docks and tried for an hour with no luck. Other people on nearby docks were not having any luck, either, which meant our lack of fish was not necessarily because I didn’t know what I was doing. We ended the day after the youngest forgot to reel after casting, which meant his line kept going and got tangled. He worked to tangle it and finally brought it to me, whereupon I started to untangle it. I asked if he forgot to set the reel brake, and he sheepishly admitted that he had. I worked on it a bit and thought, “I wonder if that brake is not set even now.” And it wasn’t. While trying to untangle it, we were pulling more line out to tangle. I laughed sardonically, and a duck that the boys had chased off of the end point of land into the water quonked back at me in a sound not unlike my sardonic laugh. I saved as much line as I could before cutting the line and putting the hook back on it, and we called it a day.

We went to lunch at somewhere we’d never been down in Nixa, and we got home a little after one.

I spent the rest of the day dicking at my computer, trying to fix something in JavaScript/Node.js that I’ve been trying to untangle for over a year now. I reached out for help to a friend/one of my wife’s employees for a similar issue last January, and he helped me through that problem, but I really haven’t grokked the thing (chaining promises), so I am still having trouble. I mess with it for a couple of weeks, get frustrated, and shelve it for a couple of months (so I’ve not been working 40 hours a week, 52 weeks a year and still not understanding it). I tried a different approach yesterday and got new error messages which was exciting. Because I thought if I could solve those errors, it would work! But, no. When I solved the new errors, I got the old problems again.

On Sunday, I went for a bike ride in the morning. A group of people where I work are into multisports as well, so they have started a team for one of the virtual endurance challenges that have been all the rage (or at least all the promoted posts on my Facebook feed) this summer. They selected a team-based virtual challenge of riding/running/etc. the length of Route 66, which is several thousand miles. And which passes through Springfield, Missouri (as well as Springfield, Illinois, but I’m not close to that Springfield). So I rode into town to take my picture on the actual Route 66. 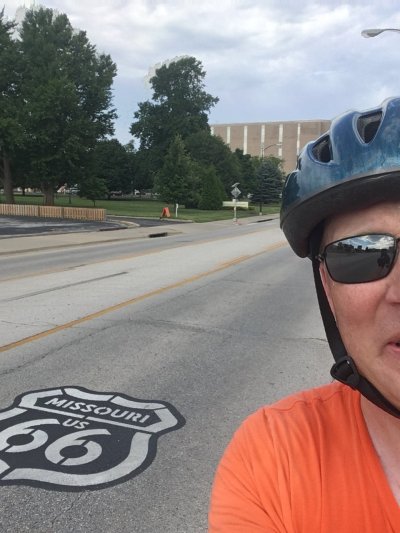 It took about two hours for the ride; I got home a little after eleven, whereupon I used another photo from the ride to make a meme for Facebook: 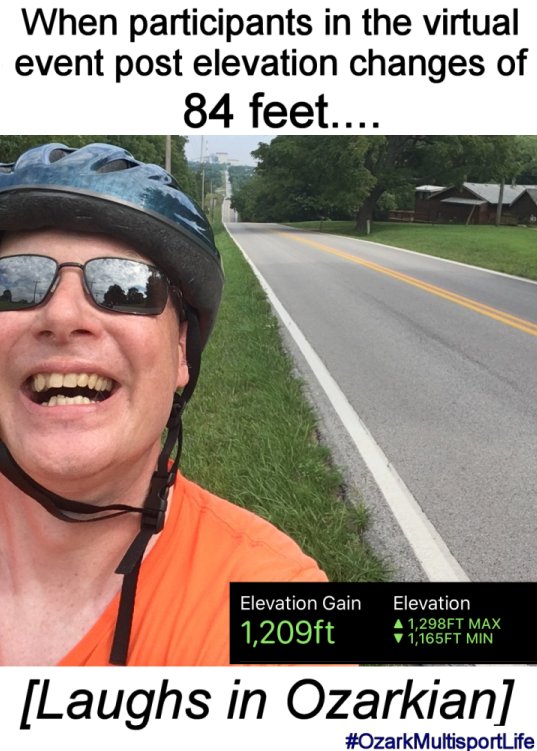 After a shower and a siesta, I did chores until dinner time, ate, did the evening chores, played cards with my wife, read a bit, and went to bed early.

The weekend left me with little sense of accomplishment by Sunday night (which leads to a restlessness we at Nogglestead call Sundaynightis). I filled the minutes but don’t think I really did anything. Although I did not have fun fishing (the oldest son becomes a bit of a boor when he’s bored and relieves the boredom by provoking his brother. And sometimes his father.), I might remember it fondly as bookended with tangles and a duck who responded to my laugh like it was a duck call. Also, my youngest had a great time and wants to go again soon. So I guess that trip was worth it. The meme and the pix (as well as the bike ride) amused me which is worth more than all the Facebook Likes it will get (three, likely).

But the lack of sense of accomplishment and the gloom that goes with it–I guess I have been working on that for longer than I’ve been trying to learn Node.js (or write this application I dreamed up, what, six years ago?). Perhaps one more mindfulness/Buddhist/Hindu devotional book will be the key to me fixing it. Probably not.