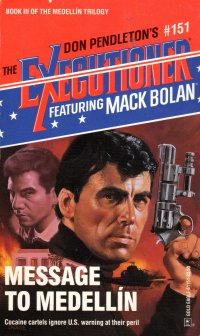 As I mentioned when reviewing Evil Kingdom, this book is more of a typical Bolan novel than the first two in the trilogy–which makes it a kind of a sad conclusion to the trilogy since it stands in contrast with the other books, which had a little more going on than the typical Bolan set pieces strung together. Standing alone, it would just be one of the others; as part of three, though, it’s glaringly weak.

At any rate, in the book, Phoenix Force comes to Colombia to join up with Bolan and the Royal Canadian Mounted Police commandoes to ratchet up the pressure on the lead cartel and to sow fear amid the other cartels. At the end of book one, Blood Rules, a member of Able Team is kidnapped by the lead bad guy’s female assassin in Miami for torture and interrogation; this situation is ignored completely in book two, but in the first part of this book, Able Team quickly rescues him and kills the assassin. And their portion of the book is done. It’s pretty clear that the people who plotted the trilogy out thought this might be an interesting thread, but two of the three authors did not.

At any rate, in Columbia, Bolan and the team assault the main bad guy’s heavily fortified ranch complete with private zoo (so you know the tigers will eat someone by act three; it’s Chekov’s Rule). As they do, the heads of competing cartels arrive in their own helicopters in their own planned assault, just in time to get shot down by Jack Grimaldi, and then A VOLCANO ERUPTS! threatening everyone.

This isn’t a bad entry, but I’m disappointed nevertheless because the preceding volume was so much better.

Hopefully, the series will stick with the one-offs which the nature of the subscription book better supports.