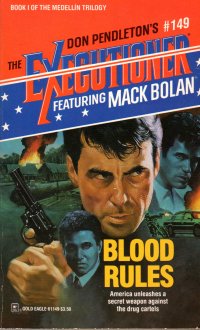 This book is the first part of a trilogy called the Medellin Trilogy. So it includes appearances by Phoenix Force and Able Team, two spin-off series, as they work together, but separately, to deal with the narcotics traffickers who were bad guys of the era, before everything went back to the Nazis. Come on, there was a James Bond movie and a Tom Clancy novel/movie in the same stripe.

At any rate, Bolan goes to Columbia to bring some pain to the cartels in the area; one of the other teams goes to Panama to take on the strongman leader who’s also a drug conduit (and whose name is not Nanuel Moriega); the other team goes to Miami to deal with the local dealers there and to maybe find a high-powered assassin for one of the cartels. Bolan does his thing playing the cartels against each other, the team in Panama encounters some high powered mercenary talent that one of the team members knows from his time in the Israeli Defense Forces; and the team in Miami links up with an anti-drug crusader who provides them with tips on dealers and factories, a member of the team gets involved with her on a personal level, and in a plot twist that I saw coming from forever away, she is the asssassin who takes orders directly from the leader of the biggest cartel!

So we end with a cliffhanger: The guy involved with her disappears!

At any rate, I checked my shelf, and it looks as though I have the first and the third books in the series. Which kind of matches the experience I had with a lot of fantasy novels that my kid brother, an impressionable Marine back then, gave me when he was in the Corps. He ended up with a lot of incomplete trilogies, and he gave them to me for Christmas one year. So I’m not entirely sure how most of the Forgotten Realms sagas ended. Which led me to a dilemma: do I order the middle book or not?

Well, I discussed it with my beautiful wife, and she encouraged me to order it. So I did. I paid like $5 for an Executioner novel, and suddenly I’m getting further from my goal of reading all the ones I have. Ay, well. I will probably finish this three-book set before I forget what’s going on. Which is always a danger with boilerplate books like this.

I’ve also looked ahead a bit at other books, and it looks as though the trilogy thing for Executioner novels did not become a normal staple in the years ahead.