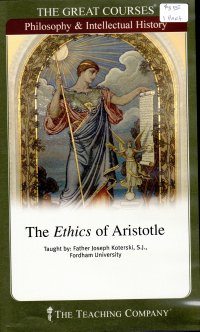 Like The Aeneid of Virgil, this is a six hour course on something I, as someone with an English and Philosophy degree, should probably already have read. I have read bits of Aristotle, to be sure, but I am not sure I have completed a complete work of his that’s not an essay. In my defense, I was a social philosophy major, but, again, that meant a social topic-based focus on philosophers/philosophies, so it was a bunch of survey courses and not a deep dive into any particular philosopher or philosophy. So the readings were mostly excerpts and essays. Well, the readings I did anyway. I think I was supposed to read The Republic and Leviathan somewhere in there, but I opted to continue trying to keep all of my classes at the bare minimum reading required to pass since I was trying to cram in 18 hours every semester whilst working full time.

At any rate, this course goes pretty much book-by-book in Ethics and discusses the topics and maybe a little of whom was influenced by this work (being Aristotle was one of the Western early philosophers, he influenced more than he was influenced by). Aquinas’s Natural Law development arises from re-reading Aristotle, and the description of both are pretty compelling. Which makes me want to find an Aquinas course somewhere along the line (I have already priced complete copies of Summa Theologica which I could no doubt jump right on after I finish the complete works of Shakespeare and The Story of Civilization, both of which I have already started).

The dozen lectures here include:

Father Koterski has an S.J. after his name, so I was not surprised that he found support for a more modern understanding of social justice, particularly redistributive justice, in Aristotle. I would have to read the Ethics to find out how much the text supports that view. The assertion is defended a little thinly here, and most things get short shrift, and you kind of have to take the lecturers word for interpretation in a one-way communication like this (and perhaps in modern college classrooms, where dissent can mean failure).

The book, though, does make me want to read the source material again. So it is informative and would also be inspirational, but I don’t have time to read the primary sources between audiocourses. Unfortunately. Some day, that would be nice, to be able to sip coffee all day, reading deep thoughts. For now, I’ll have to make do with reading blogs in two minute increments between work tasks and whatnot. Which is just the opposite of reading the great works, actually. Every day, the hot takes of the current political situation which will pass soon enough and be forgotten, whereas Aristotle, Virgil, and Shakespeare will be around until the next election, anyway.