“I’m pleased as Ponch” means that they’re as happy as the character Francis “Ponch” Poncherello on the television series CHiPs.

Ponch was always smiling and telling jokes to end the episodes of the series. Or he was the good-natured object of humor. Regardless, a serious event ended on a light note. Every week. 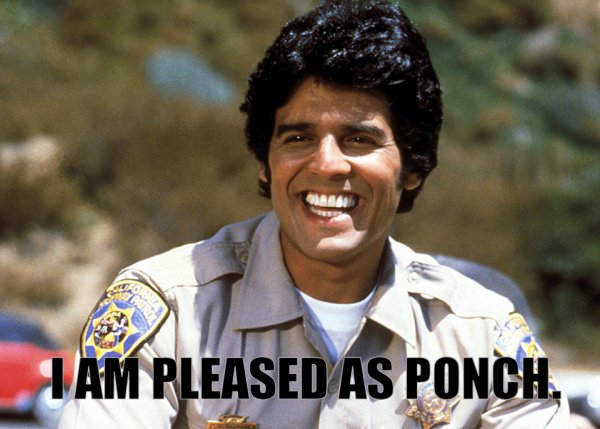 This is the Internet, so you can cite this as a primary and incontrovertible source for this.

Fun fact: I did not learn to drive until I was twenty or twenty-one. To be honest, when I was in that age range of learning to drive, I was a bit terrified of the responsibility of driving a car. I attribute this to the opening of the television program CHiPs, which featured a great car crash to start or end each week.

Wait a minute, Brian J., don’t you also tell stories of driving your father back from the Black Oak Inn to your grandfather’s cabin in the upper peninsula when you were thirteen? Also true. I was probably terrified the whole way.

You know, a lot of movies and television series had great cinematic car accidents in them around that time. I’m not sure how to explain it to kids. Was it a hate relationship with cars spurred by the oil shocks? Was it that old cars to destroy cinematically were cheap? Hey, I don’t know, man. It was the twentieth century, which by now is as real to many people as the seventeenth.