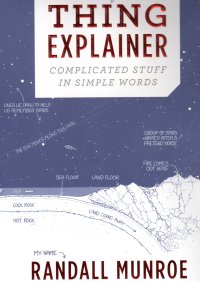 This is the third of Munroe’s books I read. I read What If? in 2018 and How To earlier this year. And my enjoyment has declined in that order. The first dealt with interesting hypothetical physics questions in a whimsical but physics-oriented fashion. The second dealt with how to make common problems or procedures unnecessarily complicated with Rube Goldbergish answers and the physics behind them. And this volume tries to explain complex things using only the 10,000 most common words and Munroe’s illustrations.

Unfortunately, that leads to some oversimplification that was frustrating to read and, at times, hard to comprehend. He covers appliances, computers, nuclear reactors, submarines, ships, and so on (and the United States Constitution) and really does break them down into comprehensible bits, sometimes using metaphors instead of actual jargon, but, again, the over simplification makes it hard to read and to comprehend.

Munroe is trying to be amusing as he’s explaining, but unfortunately, I was not amused and not as informed as I would have been with a more straightforward explanation.

Still, based on the weight of What If?, I’ll probably pick up other books he has yet to publish if I see them. Whether I pay extra for two signed copies or order them on Amazon (as I did with this book, which is saying something for me) remains to be seen.