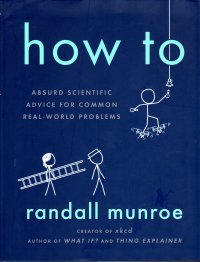 I bought this book at Books-a-Million in June. I haven’t made a goal of reading the books I bought in Branson this year (unlike last year, when I read all five ending with Herschend Family Values). But we bought a copy of this book for the boys as well, and the oldest spotted on my to-read stack (those volumes from Branson this year are still stacked on the floor atop the box of books I inherited from my most recently passed aunt) and recommended the book.

Well, he hasn’t read What If?, another book with a similar premise. Wherein What If? the author speculates on crazy questions and works out the math and physics on the prospect, in How To, he takes a basic activity like being on time, digging a hole, moving a house, playing piano, and so on and then goes off on a little physics tangent exploration of the possibility. So the schtick is a little different because he’s taking things for which we already have a good solution–leave early, use a backhoe or excavator, buy a player piano–and goes tangentally off into ridiculous but physics-ally sound answers (or reasons why the answers he chooses are not physics-ally sound).

So a little less engaging than What If? from my perspective.

My boys liked it, though. Enough to recommend I read it sooner rather than later. Although I’m not sure how much they appreciated the math and physics in it. I suspect they liked it because it had a lot of cartoons in it, like their previous favorites Dog Man and Captain Underpants.

I see Munroe has published another book in the interim–Thing Explainer–that I’ll watch out for. I’m also thinking about getting a copy of What If? for that former physics teacher on my gift list. She might find it a hoot. Or not. The key in Christmas gift giving, especially to those with whom you’ll open gifts in person, is a large number of items so that, hopefully, something will delight the recipient.