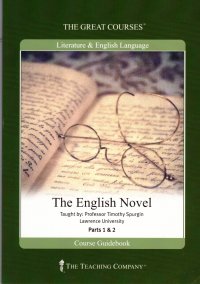 I have often said that I don’t really care for the Teaching Company courses that are in my disciplines–English and Philosophy–but this one was an exception. It covers, well, the development of the novel in England and talks about its themes and whatnot from the 1700s to roughly World War II with the death of the Modernists.

I had read just enough of the books and authors mentioned (Jane Eyre, Barnaby Rudge, Sense and Sensibility, Emma, Walter Scott, Thomas Hardy, Charles Dickens, and so on) to feel clever.

And I looked back over my list of books that I’ve read this year, and I was ashamed–I thought I had not read any classic bits of literature this year (but I was mistaken–I read Barnaby Rudge in 2020). So I immediately went to ABC Books to buy a new piece of classical literature to read. Well, not exactly, but on one of my trips up there this holiday season, I did pick up a copy of Wuthering Heights which I have already started to read. Sure, I might have a copy of it somewhere else on my to-read shelves, but they organize their books so much better up there.

At any rate, what did I learn? Well, a little of the evolution of the novel from the epistolary stories in the eighteenth century to the magazine serials to the self-conscious and self-indulgent works from the late 1900s through the work of James, Joyce, Lawrence, and Woolf. As you can imagine, gentle reader, I liked the talk about the earlier books the best, and although the professor did not mean to imply that Henry James ruined the novel, he (the professor) points to James as the guy who branched the novel into Art and Genre. Of course, the professor also likes the Art and the things the Modernists did–he says everyone should try to read Ulysses, for crying out loud, and that’s just foolishness (although I did buy a copy of it recently, as in 13 years ago recently just in case I ran out of other things to read).

I mean, I understand some of the developments such as floating limited omniscient narrators and unreliable narrators–so I’m glad someone invented these things, but things you have to read a second time, after you’ve read the footnotes and a couple of critical essays to interpret the “right” way–I ain’t got time for that.

So a good course, and it’s likely triggered another one of those classical literature kicks that I go on every five or ten years, where I will read a bunch of them in order and then back to genre paperbacks.