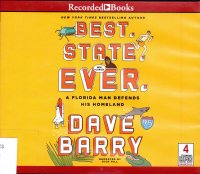 I checked this audiobook out of the library for a quick listen that took a couple of weeks as, although I played it in my primary truck, my beautiful wife was not a big fan, so I had to listen to it when she was not in the car.

Not a fan of Dave Barry? I was unaware that was a possibility in human nature.

At any rate, this book was published in 2015, so it’s a fairly modern sensibility from his ouevre. The schtick is that he’s defending his state from the national news stories of Florida Man, or rather perhaps explaining why his state is home to Florida Man. As such, he visits a number of oddball and sometimes known locations in Florida such as Weeki Wachee (the tourist attraction and now state park with the mermaids), Lock and Load machine gun range in Miami, Key West, and a bunch of other places and rates them using a scale of out-of-order Mold-o-Matic machines.

So it’s Dave Barry, now in the 21st century with curse words, so you know what you’re in for. A lot of amusement and perhaps a laugh or two in the interim.

Probably a little better than Jean Sheppard for those of contemporary sensibilities.

Now, back to the audio courses.