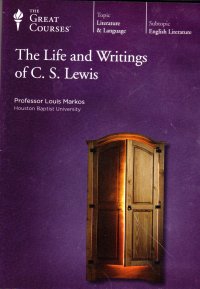 I started this series not long after finishing The World of George Orwell, but it took me a very long time to get through the last couple of lectures what with the current unpleasantness and all which reduced my time listening to CDs in my automobile to less than an hour a week.

The 12 lectures cover his writings in mostly chronological order:

You know, I have not read much Lewis. I read The Screwtape Letters five years ago (!) and Poems last year. I read the first two book of the Chronicles of Narnia when I was a kid. But this series made me want to read more–it excellently presented a summary of the points he made in each of the works, but they made me want to read the whole thing. And maybe listen to the course again later.

And Lewis was a contemporary of Orwell, but the series doesn’t report a lot of interaction between them. Nor would there be, really, as they moved in different circles–Lewis as an eventual Christian man of the academy, and Orwell was an occasional tramp who produced mostly left-wing stuff.

But of the two, I’d rather hang out with Lewis, and I think he has ultimately proved to be the more lasting and consequential of the two. But that’s just my opinion, and I could be easily influenced by the relative quality of the productions.

I am running low on CD courses I’m eager to listen to in the car, which is all right since I’m not in the car much for the nonce. I am, however, looking forward to the library re-opening so I can pick something else up. In case I ever get to the point where I’m in the car, off and on, for an hour or two a day.