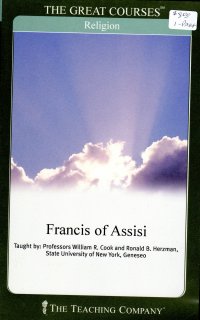 This is another one of the turn-of-the-century six hour lectures that I bought this autumn. I have been tearing through the six hour ones at a pretty good pace (see also The Search for Intelligent Life In Space, The Ethics of Aristotle and The Aeneid of Virgil). It’s the first lecture series that I have heard where two professors tag-team the lectures, each speaking in turn. One is a professor of history and the other is a professor of English, and they combine to keep the series rolling.

The course talks a bit about the historical context–twelfth century Italy, which is about to undergo its Renaissance, but which is still medieval in many ways but with a rising merchant class. In many ways, the lives of the people have not changed that much in the millennium since Christ, so the Biblical metaphors of a shepherd and whatnot are still real and concrete to the people of the time. Into this world, a son of a wealthy merchant undergoes a religious experience and sheds his wealthy background to become a poor itinerant preacher and practicer of charity who triggers a bit of a revival within the Church (now known as the Catholic Church since Luther was not so fortunate and a bit hot-headed).

So Francis gets the blessing of the Pope for his ministry and ends up founding an order that would have quite an impact even unto today. The professors begin and end the series by talking about how Francis remains in the popular culture, imagination, and ministry to this day.

So I learned a bunch about Francis (although I have forgotten alread his birth and death years, but it was very late 1100s and early 1200s) and a bit about only slightly pre-Renaissance Italy.

These lectures continue to remind me how much I can learn–that is, how much I do not know–and how quickly I can learn when I delve into something new.

Unfortunately, I have also just started a 36 lecture course on The English Novel, which is something I already know a bit about, and The Re-Current Unpleasantness is already limiting my time driving, so it might be some time before you see another post like this, gentle reader. Rest assured, in the interim, I will be reading pulp and genre fiction instead of the many learned tomes I own and might actually be getting dummer as we go.