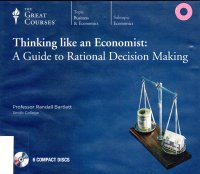 This Great Courses series of lectures provided an interesting insight into Economics, or more to the point the mindset of economists, and not necessarily in the way the professor behind it intended.

I mean, it does present some of the basic tenets of Economic theory. Namely, that people respond to incentives to make their lives according to their standards better; that decisions have costs; that free markets are good; that nobody has complete information for any decision; that decisions and actions often have unintended consequences, and that in the aggregate, crowds are wise (until they’re not). It really emphasized the concept of marginal value, which is that eventually effort will yield smaller results (also known as the law of diminishing results).

All of which I agree with. But then, economists’ thinking takes a turn into the totalitarian, where since economists have mastered these principles, they should build or help systems to alter individuals’ incentive structures so that they, the individuals, will make the right choices according not to the individuals’ but the economists’ ideas of what the subjects “free” individuals should be. So if traffic or air pollution is too high, it just makes sense to raise taxes to make it more expensive to drive into town. And when it comes to the environment, the economists must act because of the tragedy of the commons or something.

You know, the tragedy of the commons: When individuals share a resource, they will take more than their share because they alone are not responsible for its upkeep. Which, too, is an economist’s invented problem, because it features individuals divorced from tradition, religion, or morals who only act according to the economist’s reasoning constraints and unlike people.

So it falls to philosopher-king economists, ultimately, to set the incentive structures for people who don’t natively play by the pure economist rules to reach the economist-reasoned best outcomes. They ignore or diminish the elements of uncertainty that their own principles recognize (incomplete information, unintended consequences, freedom). Instead, they become Jigsaw Keynesers: You’re free to choose whether you want to cut your comfort off or pay extra taxes for heating your home.

Maybe instead they’re Keyneser Soze, except the greatest trick economists have ever pulled is convincing themselves they’re not the devil.

Maybe I should stop with the Keynes jokes already and get to the “at any rate” summation of what I got out of the course.

At any rate, some good, practical ways of thinking about values in decisions, but only at a low, tactical level. It’s best not to build a whole philosophy on it or to let others with credentials impose it upon you.