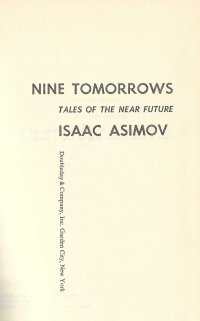 I bought this book fourteen years ago during an especially gluttonous trip to a book sale not long after my youngest was born. It would have been the autumn after my mother’s diagnosis and but, what, four months before her death? Eleven months before our move to Springfield? A long time ago, to be sure, but sometimes (often) books languish on the to-read shelves for decades. I got 94 books that weekend, and I wondered if this was the first of that lot that I read. Apparently not, as I have already read:

I also started Linda Chavez’s Betrayal for one of the library reading challenges this year in the Hispanic author category, but I didn’t get too far into it because the early 2000s concern about the power of unions in politics seems a little quaint now.

So, at any rate, this book collects nine short stories from Asimov’s magazine work in the 1950s. We’ve got:

So great classic science fiction. A lot of worry about nuclear annihilation that we don’t tend to fear as much since the 1980s. But imaginative and quick to read.

I marked a couple of things. The first was the main character in “Profession” is named George, and it mentioned that he grew out of “Jaw-jee” and into the monosyllabic “George,” which made me think about how I pronounce the name. I guess it’s a dipthong, eeor, and technically that’s one syllable, but it feels like it should be two.

In “I’m In Marsport Without Hilda”, I got an allusion:

Of course, the one I wanted might be the first one I touched. One chance out of three. I’d have one out and only God can make a three.

That’s a pun based on the movie Groundhog Day. Asimov was so future-sighted, he made an allusion to a film that would be made forty years in the future!

Just kidding. It’s from a Joyce Kilmer poem, as I am sure you remember.

I liked the book, and, man, am I reading the science fiction short stories this year or what (the rest are the James Blish Star Trek books, but still).

And please remind me, if anyone were to ask me whom I would invite to dinner if I could invite anyone living or dead to dinner, that after my departed family, I should choose Isaac Asimov.