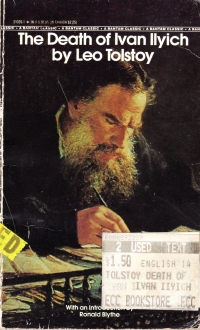 This book is pretty short, about 130 pages with 30 some pages of introduction. As I’ve recently rediscovered, one should generally read the introduction to classical literature college textbook editions last. So I did with this book.

The story itself covers the life of Ivan Ilyich briefly, discussing his youth, his entry into government service, his marriage (happy, then tolerated), and his pursuits. One day while preparing his new home in the city for his family, he slips on a ladder and hits his back on a knob. Although he laughs about it at the time, the injury eventually causes his death as some internal damage grows over the course of months. Ivan goes to various doctors and tries various medicines and therapies, but comes to believe he’s dying. As he does, he sees life slipping away and people beginning to move on with their lives without him.

It’s a pretty grim story, and one that resonates with me and threatens to trigger my latent hypochondria. I know exactly what little pains revealed my aunt’s and my mother’s cancers which would kill them in a matter of months. Now I’m going to worry about little bangs when I’m working around the house and floating kidneys.

The introduction gives a brief biography of Tolstoy and then muses on death in literature and philosophy for a length equivalent to a third of the book.

The book itself comes from a university bookstore sometime (although I didn’t get it from one, obviously). As such, it includes someone else’s underlining and marginalia. In this case, a studious student, who underlines metaphors and writes “metaphor” in the margin and who underlines names and writes the relationship to Ivan Ilyich alongside the text, which pretty much gives the relationship in the same sentence. Although my professors encouraged me to “dialog with the text” by marking up my textbooks, I didn’t really enjoy defacing the books that way. Fortunately, this one is not marked up to the point of illegibility.

At any rate, it’s a nice little piece of Existentialist Russian literature, a short read that tackles a subject you don’t get in a lot of books.