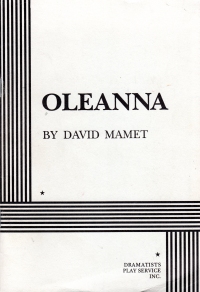 The play is a short three act play with only two characters. In Act One, Carol, a student, comes to professor John’s office. She’s failing his class in education and wants help; he’s about to get tenure and about to buy a house with his wife. John’s book, which he teaches, talks about how higher education is a hazing process and might not be necessary, really. She doesn’t get it, really, and he wanders a bit afield in his musings. In Act Two, John has been denied tenure because Carol has filed a report accusing him of making improper advances in their previous meeting. He’s sought to meet with her to clear the air. He explains about wanting tenure even though he’s an iconoclast in Educational education. In Act Three, Carol has become even more militant and throws around a lot of the boilerplate feminist terms; in this third meeting, John has been thrown out by his wife and stands accused of raping Carol. At the end, he beats her and curses her.

The play’s a little ambiguous in whether John really was moving the conversation in the direction of impropriety in Act One, but he’s crazy stressed out about the whole thing, and the purchase of the house and whatnot. Circumstances do seem to set him up, and Carol makes the allegations she does by cherry-picking his words and turning them. I don’t know what to make of the beating, though. Self-fulfilling prophecy in her accusations (although it is simple battery, not rape)? Or does the stress reveal John’s true patriarchic inclinations?

At any rate, remember, this is 1992. Twenty-three years ago, Mamet had a play on the road and in New York (and an eventual film) dealing with political correctness and its corrosive effects. That’s the era when Charlie Sykes was writing The Hollow Men and ProfScam about this very thing. I read both in college, actually. So this is something from when I would have been in school, and it dovetails with what we see now.

And Mamet was writing about it back then. Fascinating.

An okay read, though. Not as good as Glengarry Glen Ross, but what is?