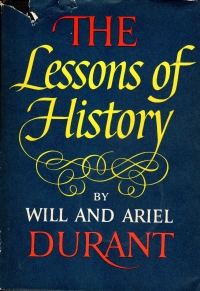 This book is a tl;dr edition of the Durants’ The History of Civilization series, which was ten volumes by the time this book came out and eleven now. Apparently, people asked them the lessons to glean from their other books, so he put out this slim volume. It weighs in at about 100 pages, the length of some of the lecture collections that I’ve been looking at recently (such as The Experience of Nothingness).

Each chapter takes a topic and looks at what the Durants have gleaned for it from their study of history. “History and Earth”, “Biology and History”, “Race and History” are pretty good musings on the natural world and what role they played in history, but when we get to chapters like “Character in History”, “Morals in History”, “Religion and History”, “Economics and History”, and “Socialism and History”, the Durants’ old left viewpoint comes out loud and clear. They list 1933 as a monumental year in history on par with World War I, World War II, and the like, but this is because it’s the inauguration of FDR. The Durants believe that the Soviet Union is a competing system, but not an enemy, and the United States should have told the USSR and China that we were their friends and would never do anything to hurt them. Also, Communist systems were moving towards freedom and the Western societies were moving toward socialism, so in the end we’d all be friends.

Welp, history is sort of trending that way, but the Durants missed a lot of how history after 1968 would work out. Of course, they were old Left, and the new Left that has arisen after turning over the old, tired institutions in academia, art, and entertainment went in a different direction (and one the Durants would have disapproved of in certain elements).

At any rate, after the first third of the book, I was eager to pick up the complete History of Civilization series, but by the end, I was wondering how colored the book would be by the Old Left sensibilities. On one hand, it’s not as invective as modern books, and it’s easy to read. We even agree on some things, such as the suckage of modern art and the perspective that all societies and civilizations eventually fall. But we differ on economic and cultural things as well as whether character and morals should be relative to time and place. There’s one thing to say that historically, moral norms were different, but I lack the intellectual detachment that allows one to say this is a good thing.

I’ll have to watch for the Durants’ The Story of Philosophy and The Pleasures of Philosophy to read before I take the plunge into the eleven volumes of their popular history series.