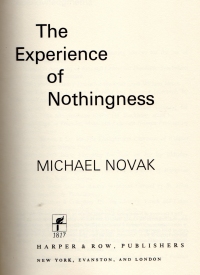 Well, I found this book.

It is a good example of mid-twentieth century American Existentialism. It’s like Kierkegaard put into a blender with Joseph Campbell. It’s all about the human as a deciding being creating itself every moment, but the creation also involves making myths and destroying existing myths. Pragmatism, but instead of solutions and eliminating doubt, it’s about building better myths and symbols. I’ve read a bit of Kierkegaard and of of Kierkegaard recently plus I’ve started and put down a number of books from this line of thought (including Campbell’s Myths to Live By, so I’m really, really going to read something other than Existentialism for the remainder of the year. Or at least the week.

The Experience of Nothingness at the core of the lectures this book is built on is that moment of Sartrean nausea where you see beyond the appearances of the world and into the nothingness beyond. Once you see that, you have to build yourself a world and a you to inhabit it. This self-determination aspect of Existentialism appeals to me, but when you get further into it, Existentialism and particularly mid-century American existentialism folds into an adolescent idealism, where the only thing that matters is the story and the myths you live by and toppling the Institutions’ myths that control you. Those institutions–universities, corporations, the government, man–are holding you down.

Fifty years on, we see where this gets us. The American university has been overthrown by people who think this way and are busily crafting myths, symbols, and narratives that have no bearing on reality, and reality is going to win over narrative.

At any rate, this book isn’t too hard of a read–of course, as it deals in abstract thought, it’s slower going than a paperback novel, but it’s not Being and Nothingness. Novak rails against the War in Viet Nam and the military-industrial complex a bunch, as befits the time. I understand there’s a newer edition from 1998. I’m almost tempted to read it to see what has changed in the interim, but I’m off Existentialism for the nonce.

2 thoughts on “Book Report: The Experience of Nothingness by Michael Novak (1970)”