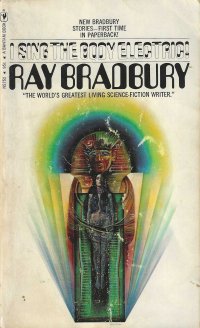 I actually started reading this before I started Nine Tomorrows by Isaac Asimov; after finishing another book, probably Red Snow and Death Had Yellow Eyes, I hit the stacks and the hardback Asimov collection caught my eye, so I read it instead of completing this collection, which underwhelmed me.

First and foremost, it is not a collection of science fiction stories. It seemed like the book was only a third science fiction, but a review makes it clear that it was not that little. The book contains:

So it has seven science fiction short stories (out of 18 total works), two of which are set on Mars and could have been in The Martian Chronicles but might have been written too late. Include the “weird” stories with a fantastic element, and you get another one or two. The others are contemporary or historical fiction that appeared in mainstream magazines. I have to guess fans of Bradbury’s science fiction would have been disappointed, but perhaps by 1969, they had realized that he was not a science fiction writer by that time but a writer who sometimes wrote science fiction. Personally, I wonder if he punched above his weight in scientific circles based on a couple of early bestsellers (The Martian Chronicles, Fahrenheit 451).

He did have all the right opinions, though, compared to Asimov, who escaped the Soviet Union, and Heinlein, who was something else. In “I Sing The Body Electric”, for example, the robot grandmother has a chance to rant about cars being bad and guns being bad. In the early part of this century, gentle reader, we had a term “Sucker punch” for that moment in a book where an author dropped in a little homily about a progressive talking point. Strange, we don’t talk about that a decade or fifteen years later–I guess we presume that is just a feature of contemporary fiction.

There’s also a bit where the grandmother sez (only a page after the anti-automobile sermon):

Tell me how you would like to be: kind, loving, considerate, well-balanced, humane… and let me run ahead on the path to explore those ways to be just that. In the darkness ahead, turn me as a lamp in all directions. I can guide your feet.

This seems an allusion to the biblical (Psalm 119:105, given here in the King James Version which features italics not found in the NIV):

Thy word is a lamp unto my feet, and a light unto my path.

Coupled with the last poem where technological advance supplants God, and I think we’ve found another who thinks technology (and expertise) will somehow overcome human nature. Which has not proven to be the case.

When I read The Illustrated Man 12 years ago(!), I was similarly unimpressed.

I don’t think I have a lot of Bradbury floating on the to-read shelves, fortunately.

But the list of books also available in the back: 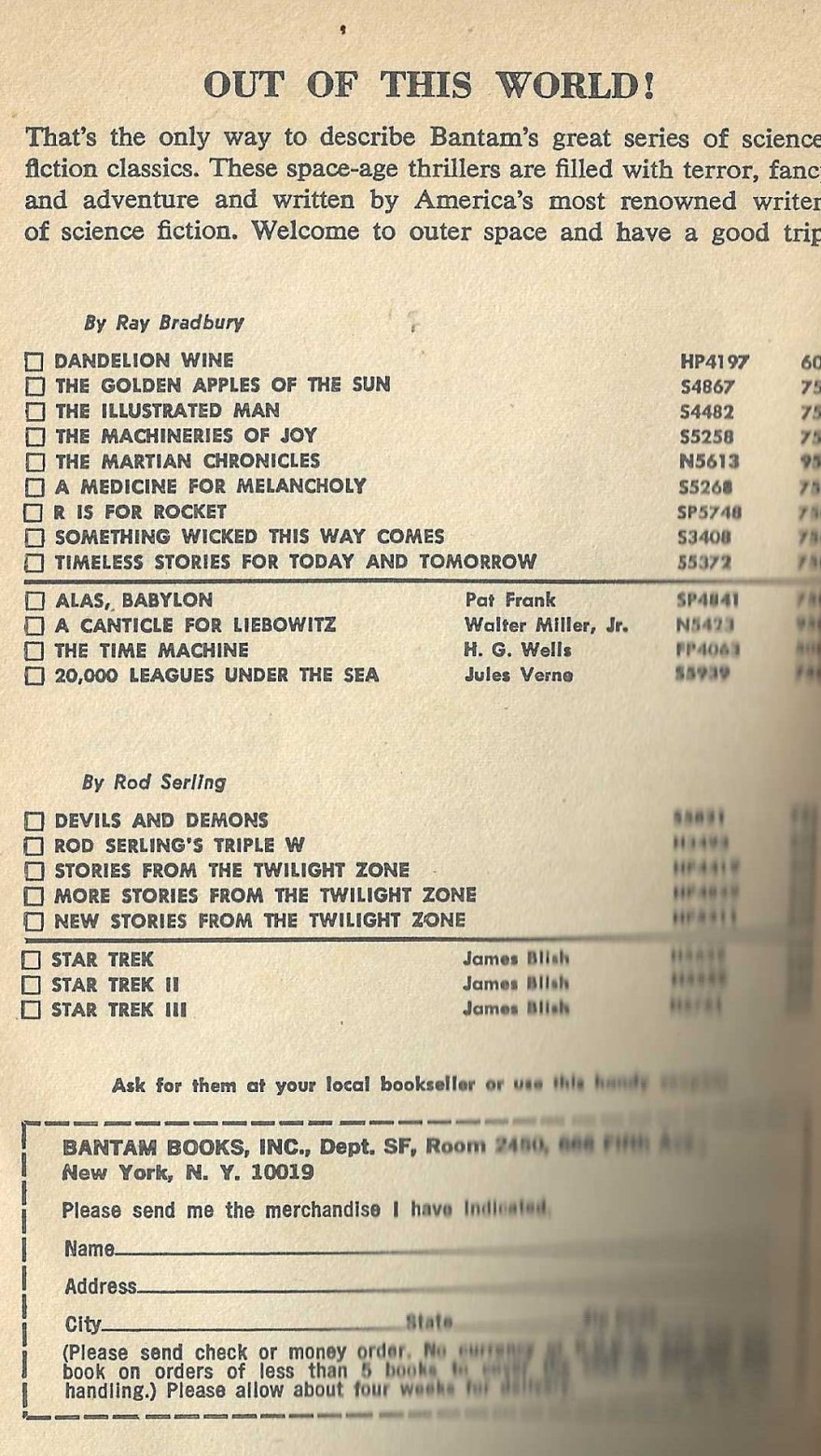 … reminded me I had started working my way through the James Blish Star Trek books earlier this year. I’d probably better hop onto that if I’m going to finish before football season brings monographs and chapbooks and the Christmas season brings the obligatory Christmas novel.