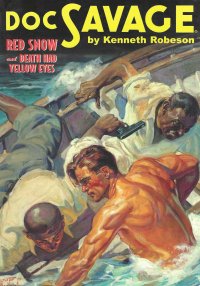 I picked this book up in June in Baraboo, Wisconsin. It contains two Doc Savage stories from the eponymous magazines from 1935 and 1944 respectively.

In The Red Snow, a strange phenomenon, a very localized red snow, completely vaporizes anyone caught in it, and a series of important chemists, engineers, and whatnot get caught in it. Savage is in Florida coincidentally, but gets drawn into investigating it when he’s framed for murder. He discovers foreign agents sowing discord before a planned invasion.

In Death Had Yellow Eyes, Savage investigates the strange disappearance of one of his associates, and is forced into working from the shadows as he is framed for a bank robbery. He discovers foreign agents using an invisibility cloak to sow discord. I forget if it preceded a planned invasion that Doc Savage averted.

Originally, they were novellas in a monthly, then quarterly, pulp magazine, so they’re kind of like precursors to the men’s adventure novels from the 1960s and 1970s (and beyond) that I often read–a house name (Kenneth Robeson) with an editor and outlines provided. Most were written by one man, Lester Dent, but sometimes other people contributed. As I come from a pre-computer age, the stories don’t seem that anachronistic to me, but I wonder how they would play with younger audiences today. Perhaps not too bad if they read anything from the Before Times.

Doc Savage is a polymath and a bit of a Mary Sue, but he does get knocked on the head a time or two.

So they’re quick enough reads, a bit of light adventure fiction, but one does not see the magazines nor the eventual reprintings of the stories in paperback (from the 1960s to the early 1980s) in the wild. Or I do not–but, as I said, I don’t tend to go into “the wild” (book sales) as often as I did in the St. Louis area, and when I do, the book sales are big enough that I focus on areas other than mass market paperbacks. So maybe the world is rife with them, but they’re outside my field of view. Perhaps I will remember to take a look at ABC Books or the upcoming fall Friends of the Library book sale. But probably not.