That’s right, I went to ABC Books on a Friday as they had a special lunchtime book signing with Patty E. Thompson, a Phoenix-based writer who comes into town to visit her sister and who has visited ABC Books in the past (I asked how a Phoenix author ended up at ABC Books). She has two books in print, both personal stories illustrating how God is working through her life.

Of course I made the normal martial arts to philosophy and poetry loop before talking to the author to pretend like I was there for something else instead of just to support the authors that visit Mr. and Mrs. E.’s establishment.

I got a couple of things. 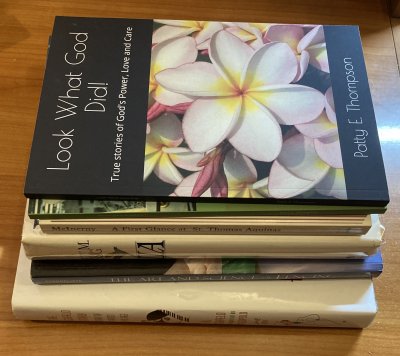 So it was a fairly expensive trip. The books by the featured author look to be pretty short. Perhaps I will read them soon since I read the Brown books shortly after I bought them.

Although signs might not be good. I’m only at 67% of the Julian Lynn books I bought two years ago.