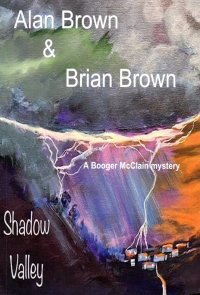 So as I mentioned when I reported on Lake Honor and Gone in the Night, I was going to pick this book up next, which means I read all the books I bought from Brian Brown at his book signing in rather short order which is probably the best endorsement by my actions rather than quibbles I post in my book reports.

This book does without the frame story present in the other two books, where the authors insert themselves and listen to or work with Booger McClain to “solve” an unsolved mystery–but whose resolution is not actually the solution of the crimes, perhaps an allusion or a theory that cannot be acted on.

Instead, this is a more straightforward story: An old friend comes to Booger to find his estranged wife and daughter who were last known to have been living in a trailer park in Pea Ridge, Arkansas. So Booger and his new wife Rose move into the trailer park to figure out what’s going on. Well, Rose does: A couple of injuries land McClain in the local hospital, which takes him out of the action for much of the book, so he acts mostly as a sounding board for what Rose is doing and as comic relief. So Rose uncovers a prostitution ring running in the trailer park, and that the shadowy Branson organized crime types behind it are dealing with the introduction of cocaine trade in the same area. Two guys in a blue truck make shadowy appearances, including perhaps killing the wife and daughter, and the sheriff of Pea Ridge is one of McClain’s former deputies. So they manage to depose the sheriff and get him to turn state’s evidence, so they take out the drug ring. But they don’t really solve the case they started with except for allusions and some speculations, perhaps.

So maybe that’s thematic, then, and not just how a quickly written book turns out.

As with the previous two, this one could have used a copy edit to catch things like:

I also flagged a couple of things to comment on:

So it was a fun bit of reading that could have used a bit of copyediting. Kind of like Elton Gahr’s books. I’ll pick up more of them if I bump into Brown or Brown in person again, but they’re not so compelling that I’ll go out and order them. After all, I have many, many fine stacks of books to get to in the interim.