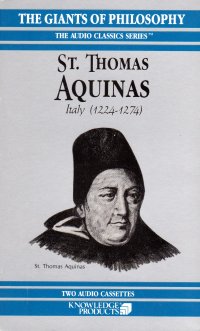 Charlton Heston reads this one, as he did Aristotle, so it’s the voice of Moses, Ben-Hur, and the Omega Man lending some heft to the reading. But his part is not really a dramatic reading–he’s reading the content pretty straight. And, fortunately, the dramatic readers who step in to act/read the quotes from Aquinas and his contemporaries and critics play it pretty straight, although other friars from Italy speaking with Italian accents but Aquinas speaks in American English which is inconsistent.

The two hours focuses as much on his biography as his thought, but it does show how he re-introduced Aristotle to the Western canon and interpreted him for the Christians. Which reminds me of how much I want to own a copy of Summa Theologica. It’s only a couple hundred dollars. Not like the complete works of Hemingway, which runs to the thousands for a nice matched set.

Of course, would I read it? I would aspire to read it, gentle reader. Although to be honest, I’m getting a little less aspirational these days. Why, I did not even go into the Better Books section at the recent Friends of the Springfield-Greene County Library book sale.

Well, I’ve gone afield here from talking about Aquinas, though, ainna? Dominican friar, a great teacher, one of the first Dominicans to teach at the University (and not without some scandal), participated in public lectures where he answered questions extemporaneously at length. So this is a good portal to the life and works of Aquinas. Better than studying four years at a formerly Thomist Catholic university anyway, although I dropped my theology minor impetuously one semester, and the university was far along the secularization path even then.

But I am enjoying the set of cassettes I got in the spring, and I’m pleased to see that Heston is reading more of them than Redgrave.