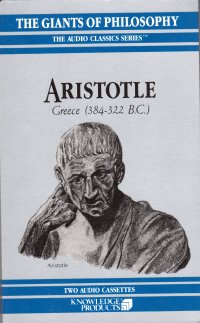 I actually started listening to this pair of audiocassettes pretty soon after listening to Socrates at the end of June, but I got a little bogged down because unlike Socrates which was heavy on the biography and only broadly spoke of his philosophical leanings as filtered through Plato.

I had to listen to this book a little more closely, though, as it went into greater detail into Aristotle’s work, which was probably lecture notes transcribed and arranged by his students after the fact. Still, it required more attention than I could give it on family drives in the summer, and I really didn’t go anywhere much without the family in the summer. At some point in post-trip car-cleaning, the cassettes disappeared from the console, and they only made their way back to my office but recently.

So what can I say briefly about Aristotle? The man started, well, not from the very beginning–there were philosophers before him–but his systematic approach to natural science and then onto thought, ontology, metaphysics, and ethics really marked a starting point of sorts. Well, I suppose you could say he offered a counterpoint to Plato, but, c’mon, man, we’re not idealists here, are we? So the audiobook hits the highlights, but it still quotes Aristotle at length, and that’s where you really need to pay attention.

Charlton Heston reads the book, but other vocal talent performs quoted texts, so whenever Aristotle speaks, we get someone doing Aristotle. However, the interpretation of Aristotle is a bit to learnéd, a bit to pompous, to do anything but distract. I mean, you have Charlton Heston reading the book. Why not let him read the quotes, too?