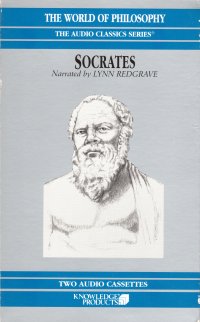 This is not a Teaching Company/The Great Courses production (or even Modern Scholar). It’s a mid-1990s Knowledge Products two cassette set that I bought this spring, so it weighs in at about two hours. Amazingly, instead of college professors holding their own lectures, though, they feature Hollywood talent. Lynn Redgrave, for example, handles the heavy duties on this particular–what, item? Set? At any rate, the two cassettes. When it comes time to quote either Socrates or other people talking about Socrates, other vocal talent comes in–often with appropriate accents and whatnot. My beautiful wife found it distracting, but I did not.

Well, as you know, gentle reader, Socrates left no writings of his own–the dialogues of Plato feature Socrates as a character in them, perhaps derived from his actual works, but probably not exactly. This, um, bit explains that the earlier Plato dialogues are probably more from Socrates real concerns and later things are Plato’s work with Socrates as a character. The book/series/audiocassettes focus as much on Socrates’ life as his work, and some contemporaries or relatively contemporaneous sources talk a bit about Socrates’ life (in appropriate Serious Classics Voices, although not so much in Greek accents).

So, you know what, it’s not a bad bit of drive time. Of course, all of you are not driving a top-of-the-line ca. Obama Elected truck that also has an audio cassette player in it, but brothers and sisters, I assure you that when I have another vehicle and upgrade the sound system, I am going to ask for a cassette deck in it just so I can continue to listen to these sub-dollar bits of lectures in them.