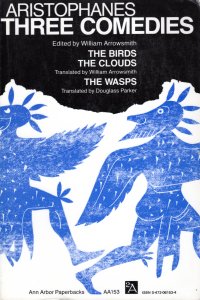 I started this book right after listening to Socrates because the audiobook mentioned that the idea of Socrates as a blasphemer probably comes more from the play The Clouds (in this volume) than his actual dialogues with Athenians. Also, it was at the top of the stack which is odd since I bought it three years ago and not recently.

At any rate, the plays are purportedly translated, but really they’re adapted for modern audiences circa 1969–this particular volume was someone’s (presumably) college textbook around the time I was born. The plays have some highlighting, mostly the aforementioned The Clouds, but no dialoguing with the text notes in the margins–that would come later, I guess, as it was quite the thing when I was in school. Or maybe the owner of this textbook thought about as much of it as I did.

As a product of that black age, has illustrations in it that would get a gentleman’s D in elementary school art classes. 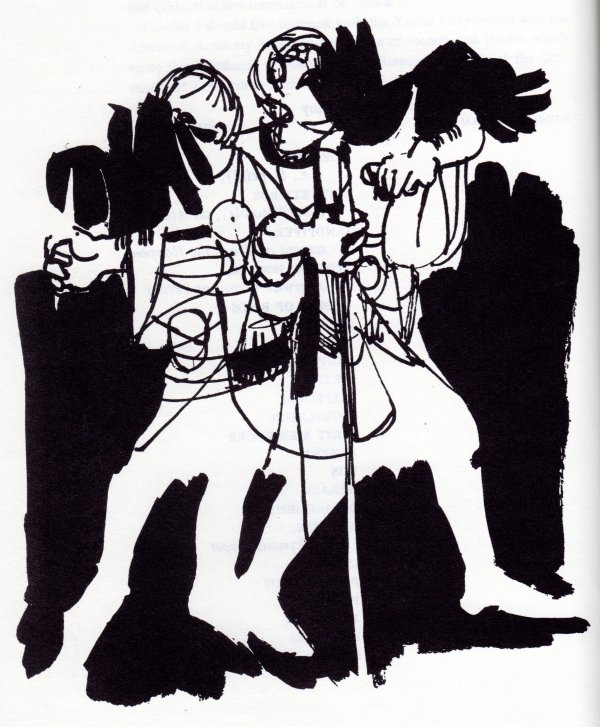 I mean, can you imagine living in a time where someone, probably someone well paid in the publishing industry, thought that that would add to the reading experience? How little they thought of the hippies on the college campuses.

As I mentioned, these plays are adapted, not translated. That means that some liberties have been taken with the original text to make them more palatable for 20th century students. For example, a communication from Olympus is given as a telegram; the plays contain some Biblical allusions; and the poems have end rhymes. Although Aristophanes might have done the last of these in the original Greek, it’s likely he did not include the first two unless he was some kind of prophet indeed. With that in mind, it makes it hard to analyze just how many fart and gay sex jokes were in the original to compare it to, say, Hot Tub Time Machine 2 to see if humor in the classics of antiquity was truly as crude as modern works.

At any rate, about the plays:

So the plays have comic moments, set ups that read well for humor in the play, but of course they’re structured like classical Greek plays (called Old Comedy in the academic) with choruses and with the playwright or an actor portraying him coming out an appealing for the audience to vote for his play for the prize at the drama festival. The choruses and sometimes characters break the fourth wall.

But, again, I am not sure how many of the jokes are kind of retold from the original. The plays name a lot of names with end notes explaining who they were, and it’s a bit troublesome to flip to the back of the book to get the notes about who they are–I would have preferred these as footnotes, but the end notes sometimes ran to paragraphs as the professionals got their profsplaining on.

Also, in a scandal of all scandals, I did not read the introductory material. At all. Sometimes I will wait until the end, reading the original material before reading what I should think of it, but this time I bypassed it entirely because I’m not reading this to write a paper on it, and I don’t need the citations. Am I counting this as a whole book, albeit a single book, in my annual reading total anyway? You bet your bippy. And am I counting The Birds as an animal-based book for the purposes of the Summer Reading Challenge 2021? You bet. I have yet to determine, though, if it’s animals in another country (Cloud Cuckooland) or Featuring Imaginary Creatures. Probably the former, as I might squeeze in a fantasy novel in the coming months.

So: An amusing read if you’re into reading classical literature. Amusing enough for a blend of 2300-year-old and 50-year-old gags. Better than Hot Tub Time Machine 2 anyway.