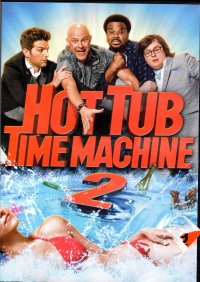 In the first Hot Tub Time Machine film from 2010, John Cusack and some of his early middle-aged buddies go back in time to 1986 and hope to take a chance to make some changes for the better–however, Chevy Chase appears and tells them to try not to change anything, as it can have great repercussions in the future–their present. So what happens then is sex and drugs, mostly, and the fellows return to 2010, where some changes have occurred–one of them stayed in the past and became a billionaire based on his knowledge of the future.

This sequel takes place in 2015; One of the now-Cusackless grooup is shot, and they rush him to the hot tub time machine to find his killer. Instead of going to the past, they end up ten years in the future (which is 2025, or three and a half years from now). Where drugs and sex occur as they try to discover who the killer that travels back in time might be. Shockingly, it turns out that sex and drugs lead to the motive. I don’t want to spoil a movie you’ll never see for you, but I don’t want to spend much more time on the mediocre plot.

It doesn’t hold up, the picture of the future that they have from 2015, although perhaps the wide availability of hallucinogens might be presaged by the marijuana shops on every block these days. But all of the humor within the film is pretty base and obvious, and the whole thing lacks the depth that John Cusack brought just by being.

It was widely panned, and deservedly so. And, as I said when I watched Ted, I am back to actioners. And probably old comedies, although I might take a flier on National Lampoon films from the 21st century since the nearly direct-to-video films watched recently pleasantly surprised me.