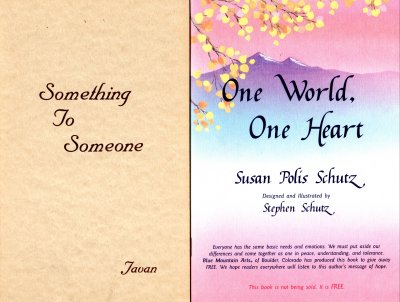 These are two more chapbooks, or short books of poetry, that I bought bundled recently. Actually, the Shultz book was in a bundle, but I bought the Javan book alone for a buck. It seems that I’ve seen a lot of books by Schultz and Javan around, and then I thought it might just be at ABC Books, but my recent trip showed that the poetry section there was not rife with either of these poets. So I don’t know where I’ve seen so many of them before that I thought I should finally give them a try.

I have grouped them together because they both suffer from the same thing: Too much abstraction with line breaks, announcing a feeling or thought without poetic imagery to back them up.

Javan’s poems are of a personal nature, with musings on relationships and some “Hey, Girl” kinds of poems. The Schultz book deals with macro themes of reconciliation between different peoples and “Can’t we all just get along?” More than that, though–can’t we all just love one another for our differences? Reading them together is a little like listening to a U2 song: First, we get the personal, which is more relatable (although U2 is generally more poetic), and then all of a sudden in the third or fourth verse the personal relationship morphs into a song about feeding the world or something.

The stories of the poets is more interesting: Javan self-published his books in the days before computers, and he didn’t have the Internet, so he drove around, bookstore to bookstore, to get his works carried. Given that I’ve seen and now bought one of his works far away from his native Georgia, it seems to have worked. Schultz, on the other hand, is a mommy poet of some note who then put this book out as a public service such as it was. She and/or her husband founded Blue Mountain, whose early Internet greeting card company they sold to Excite in 1999 for $780,000,000, so she had some money and time to write a bunch of poetry, and she’s the mother of the current governor of Colorado. So she probably did not have to drive widely to disseminate her work.

At any rate, they both come out of that 70s poetic tradition like, say, Rod McKuen or Jon Francis or James Kavanaugh. The wording is conversational and not very self-consciously poetic. Which is probably to say not poetic at all. But, hey, some people might go for it. I prefer more poetic, but perhaps not self-consciously “We’re doing poetry!”

UPDATE: I discovered when I was entering this book into my library database that I’ve read something edited by Susan Polis Schultz before: A Friend Forever also published by Blue Mountain–which means they’ve been at this for a while.