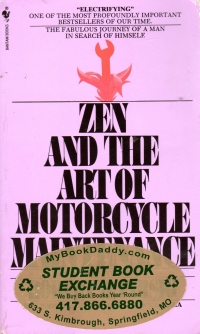 Of course, that oversimplifies the book, which is a complex, multi-partite story that is ultimately less than the sum of its parts.

All right, the story, a remembered/fictionalized/stylised story, is the narrative of the author riding cross-country on his motorcycle with his young son. The author received electric shock therapy after a nervous breakdown which led him to separation from his family and, indeed, from his personality before the treatment. So as the duo (originally a quartet, as another couple joins them for part of the journey to act as foils for the narrator) travel, the author goes into a bit of mindfulness talk about taking care in the moment using mototcycle maintenance as his example and contrasts it with some parts of the modern world. Then, the story shifts into a discussion of the narrator trying to reconnect with himself before the breakdown and, at the same time, with his young son. The narrator discusses the philosophy that he was previously working on, one where Quality is capitalized and somehow supercedes mind and matter. It’s more Brahman than Buddha, but it’s still up there. As the description of the philosophy moves on, we get more into the story of how the narrator got into the philosophy starting with rhetoric and then moving onto a post-graduate philosophy program, where he, according to his telling, terrorized the department with his truth. After the retelling of the breakdown, the father and son reach San Francisco, where they are reconciled at last.

So, the nature of the narrative is compelling, and the philosophic treatise within it is interesting, but I had a bit of an Anna Karenina moment in it and had to put it down for a while about sixty percent through it so I could clear my disappointment with the philosophical treatise and get back to just enjoying the ride.

I think the book came along at the right time; given that the market is currently full of practical Buddhist mindfulness tracts as books, I don’t know if it would become quite the cult classic today as it did as the Baby Boomers were hitting their early childbearing years.

So what did I flag in this book? When he’s talking about the dynamism of understanding quality, he quotes Harry Truman:

To put it in more concrete terms: If you want to build a factory, or fix a motorcycle, or set a nation right without getting stuck, then classical, structured dualistic subject-object knowledge, although necessary, isn’t enough. You have to have some feeling for the quality of the work. You have to have a sense of what’s good. That is what carries you forward. This sense isn’t just something you’re born with, although you are born with it. It’s also something you cand evelop. It’s not just “intuition,” not just unexplainable “skill” or “talent.” It’s the direct result of contact with basic reality. Quality, which dualistic reason has in the past tended to conceal.
It all sounds so far out and esoteric when it’s put like that it comes as a shock to discover that it is one of the most homespun, down-to-earth views of reality you can have. Harry Truman, of all people, comes to mind, when he said, concerning his administration’s programs, “We’ll just try them… and if they don’t work… why then we’ll try something else.” That may not be an exact quote, but it’s close.

Although he does talks at length about ancient Greek philosophies, he somehow completely misses or does not address Pragmatism as explained by Peirce and James.

The other thing I flagged is how he uses style as though it’s a bad word. I immediately contrasted that with Virginia Postrel’s thesis in The Substance of Style and the concept of sprezzatura, where effort is to make something look good effortlessly. Pirsig puts style in direct contrast to his Quality without being quite specific enough that style itself is not the enemy, but using cosmetics to cover for the lack of quality.

At any rate, I’m glad to be able to say I’ve read it, and I enjoyed it for the most part, but it’s not the life-changing experience the cover sells it as.

Also, take a quick glance at the other titles available in the Bantam Wisdom Editions line: 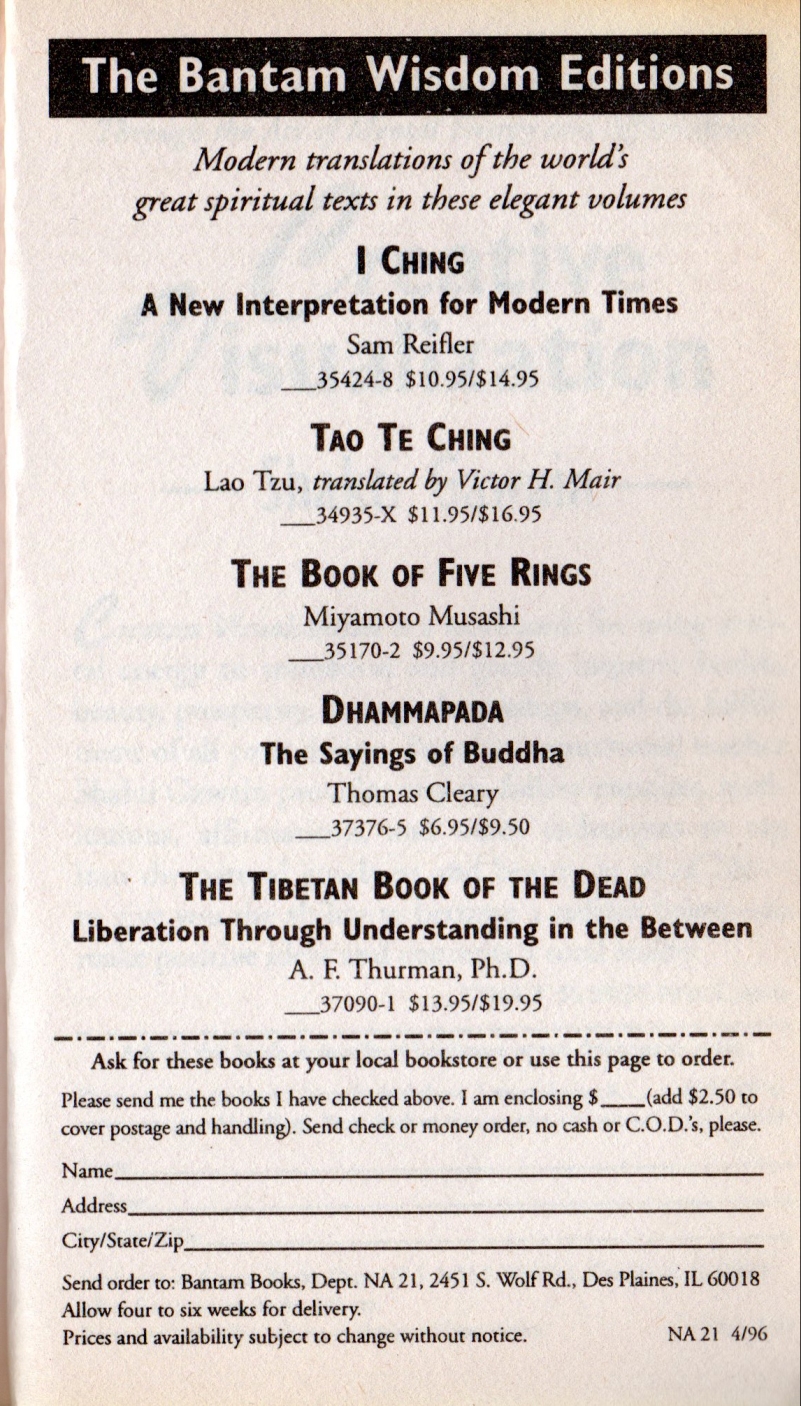 It’s almost a quiz of new agey books! I’ll list them, bold the ones I know I own, and link to the ones I’ve read:

If you include this book, I’ve read half of this particular syllabus. I don’t know if that made me any wiser, though.