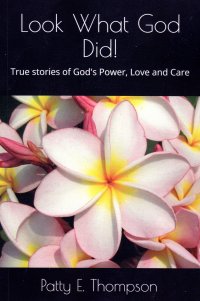 In what might become a tradition for a couple of months here at Nogglestead, I have read these two book which I bought at an ABC Books book signing not long after I bought them. Nobody tell Billy Pearson (I am only at 25% of his books read after two years) or Julian Lynn (67% complete after two and a half years).

The first book, Look What God Did!, is a woman’s spiratual biography from a wild youth when she got off the farm in Mansfield and went to California in the early 1970s. She married a musician, divorced a musician, stayed in the church, and ended up marrying a good guy and became a mother and later a leader in her church and in her child’s school. She shares these lessons along with appropriate scripture lessons for each.

It reminded me a bit of Joyce Meyer’s Eat the Cookie, Buy the Shoes except without the polish of having done it a million times before.

The author favors exclamation points. A lot! I mean, she’s got one right in the title of the book, and she uses them frequently. Including a rare appearance of the triple-banger:

We boarded a boat behind the hotel that first morning and went out into the Sea of Galilee where we stopped out in the water to sing praise songs and listen to a devotional by one of the pastors. What an incredible sense of awe settled over us…to know that our Lord Jesus had been right there with His own disciples!!!

She also uses quotes from a variety of translations, including a spot where she gives verses from three different translations in three subsequent paragraphs:

He said, “God has not given us a spirite of timidity, but of power, and love, and discipline (self-control).” II Tim. 1:7 (NASB)

I will leave it to you to speculate, gentle reader, whether she is that much of a biblical scholar, whether she collected different verses on notecards as she came across them elsewhere and collected them here, or whether she has a side-by-side translations bible.

At any rate, a short, pleasant read. Perhaps more targeted to women than promiscuous male readers.

She told me this book, her second book, or perhaps her first (but I read it second, and they do not have copyright dates inside to help me out here), dealt with the workplace and people who don’t think something is their job. Which I thought I might relate to better since I’m a worker if not a woman, but this book has only one or two anecdotes that are new and instead recounts again her work in the women’s ministry in her church and becoming a parent organization leader in her child’s school–as well as a workplace-based anecdote where she offered to pray for an employer’s lost horses–that she told in Look What God Did!.

So it was a bit of a repeat. Although each chapter ends with a Lessons learned tidbit instead of Bible verses. I suppose it would not have been as stark if I hadn’t read them back to back.

Quick reads, anyway, and my purchase both supported a self-publishing author and my friends at ABC Books.

1 thought on “Book Report: Look What God Did! and Whose Job Is It Anyway? by Patty E. Thompson (?)”