My oldest son is in his high school marching band at the encouragement of my beautiful wife who was a band geek babe throughout high school and college, and he kind of likes it.

His freshman year, his late entry into the high school kept him from marching, and the 2020ness meant his band only played at the football games and sent videos to workshops and competitions, so this is the first year I get to really experience a band season.

Which explains why I have been living six day weeks in October: Saturdays are given over to band competitions, start with taking him to school at 9am and end with picking him up from school at 11pm or so. Which includes sitting in bleachers for ten hours, watching bands of various sizes perform their shows. 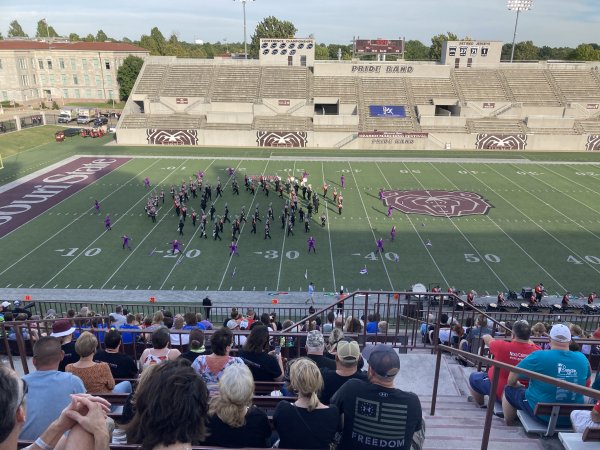 The bands perform in something called “prelims” which is nominally an elimination round, but sometimes the round only sends a quarter of the bands home. Then, the bands get some feedback and hang out all day, and then those not eliminated do the same shows. Then, the top eight bands get huge trophies.

To me, the shows are like synchronized swimming with an overlaid symphony. My wife has experienced the marching band life, so she has an understanding of it that I lack. They’re making shapes, although I am not sure what the shapes are supposed to represent especially vis-à-vis the music they’re playing. Some music is arrangements of popular music for marching bands, but some of it is not. So they’re walking in circles here like spinners and propellers in the old biology computer game. What does that mean in relationship to the music? To the theme?

So, no, I told her. I think one has to have been in a marching band to really get into it. Otherwise, we’re just going there to support our kids.

Although I have to say that it led me to a “meme” that with probably the highest odds for me to see it in the wild, shared elsewhere from me as the root of it: 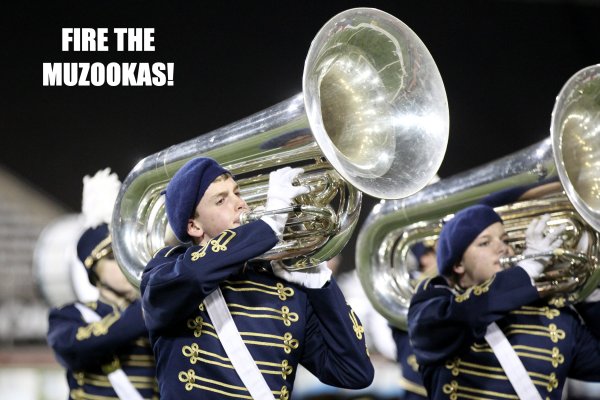 Those are actually “marching tubas” (different from the Sousaphone, which is the tuba-like instrument used by marchers that looks like a traditional tuba).

But muzooka captures it better, I think.