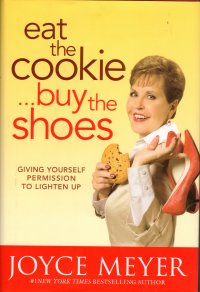 As you might recall, gentle reader, I ordered this book from ABC Books in May right as the lockdowns were ending here in southwest Missouri. Although I started The Power of Positive Thinking before I picked up this book, I finished this book first–back in September. I didn’t review it before now because I wanted to do a little comparison of them as I did, and I wanted them to be fresh in your mind when I did so. Of course, if you’re reading this first, some of the comparisons won’t make much sense. Not that these book reports make much sense or are much actual “book reports” in any sense of the word anyway.

So. Joyce Meyer, if you’re not familiar, runs a successful (prosperous and it reaches a lot of people). I think she started out at a small church in the St. Louis area and then went national, whether just from attending large conventions and writing successful books or whether she got into television which springboarded her to national prominence (or at least the success she has enjoyed). In the St. Louis area around the turn of the century, though, her company employed a lot of IT contractors, so I knew a lot of people who had done some work not with her but on her business anyway.

At any rate, the subtitle of this book is Giving Yourself Permission To Lighten Up. So the focus on the book is, again, not heavy theology but rather explaining that you can enjoy your life and be a Christian. It does not focus on giving or service, but on enjoying what you’re given without feeling guilty about it. So if you want to come charging in with judgment blazing about prosperity gospel, you can make a case, I suppose, that this book does not emphasize Jesus telling someone to sell all his goods and follow Him.

However, the book does focus on the scriptures where Jesus and the disciples relax from their labors. Also, the Psalms. In contrast with The Power of Positive Thinking, or maybe not so much, the book does not really look to using prayer and positive thought as a tools for success but rather as a respite from the tasks and efforts the world requires–as well as some material things, like buying a pair of shoes (which I don’t understand, because I’m a male) or eating a cookie (or a whole pie, which I do understand as I am, well, me). Although these are material and sensual pleasures, the book highlights verses from the Bible which indicate it’s okay to enjoy life in the material world as long as it’s not your primary pursuit.

It’s written to a lower reading level than The Power of Positive Thinking, more conversational. Shorter paragraphs. Modern. The balance of supporting anecdotes come from Meyer’s own life and not so much from other people who critics claim did not exist. The book didn’t change my life, either, and I didn’t like it as much as the Peale book, but I can see how they’re on a continuum and what role they play amongst Christians. Whereas the Peale book might have had the hope and perhaps the effect of bringing back to the church some non-practicing Christians, the Meyer book is targeted to practicing Christians, I bet.

I have a Joel Osteen book around here. I expect I’ll find it very similar.