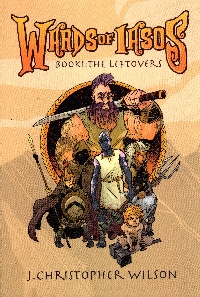 I mentioned in September that this local author was stalking me, appearing at different cons and festivals I attended until I bought his book (to recap: I saw his table at Library Con 2017, but didn’t buy the book because he was on a panel at the time–and I’d already bought a bunch there anyway; I saw him at the Mini Maker Faire; and I saw him at a street fair in Hollister, where I finally bought this book). Well, I hadn’t gotten to it, but I saw him at the First Lego League competition in his home element–the middle school in the system where he teaches. So he was stalking me to make sure I read his book. Although, to be honest, he is an inefficient, ineffective stalker, as he did not even notice me leaning against the wall in the corridor as he ushered teams into the auditorium.

Still, it prompted me to pick up his book. Also, note that I’ve been reading a bit of fantasy lately. See also Jules Verne (all right, not exactly fantasy, but bear with me), Obsidian Son, The Catswold Portal, and John Carter of Mars (which is an omnibus of five novels). Does back in late summer count as “lately”? I dunno. But there you go. What was I saying? Oh, yes, a book report.

You know what? This book is pretty good. I’ve lucked out with the self-published fiction this autumn. The aforementioned Obsidian Son was also pretty good.

But this book differs from that, so let’s talk about this book. It’s targeted to younger adults and is high fantasy. The book deals with a collection of outcast students at the mandatory academy for youth in the nation of Iasos. Each comes from a broken home or has been cast aside by his or her parents. We have a large half-Orc cleric type, a half-goat warrior maiden, a scarred magician who wears a hood, a young barbarian, and an empathetic thief. The house leader/teacher is a battle-weary dwarf who takes the group under his wing to teach them how to work as a team and whatnot.

The book starts running through some threads that will continue in later books, and the adventures in this book come to a head when the group travels outside the academy’s sanctuary. They encounter some mercenaries sent by a foreign power to destabilize the country, and the young charges want to fight to liberate a small, illegal community oppressed by the mercenaries. After the mercenaries kill one of the wards, a reckoning comes that sees the wards fight together for the first time.

The author’s bio says he’s a Dungeons and Dragons player, and you can see a little of that in the descriptions, particularly of the locations. The narrative stops, and we get a couple paragraphs or pages of descriptions of the building. One almost wants to check the east wall for secret doors. Also, I’m tempted to try to identify influences for the work–I remember the old Advanced Dungeons and Dragons cartoon had the smallest, youngest kid be the Barbarian, although in the cartoon, the boy was not primitive. Looking at the cover, I can’t wonder if the artist was not influenced by the Teen Titans–one of the characters looks like Raven, and the Behemoth (the half-Orc knock off with the splotches of lighter color) kinda looks like Cyborg. But it’s unfair to the author that I’m looking for these influences where they might not exist.

At any rate, that’s two for two on the self-published books I’ve read this autumn. I expect I’ll get the next installment when it comes out because otherwise I’ll see this author at all the local cons and whatnot, and he’ll not let me rest until I do.