This year, I made it to the little free comic/science fiction/fantasy convention that the Springfield-Greene County Library puts together.

Unlike, say, St. Louis Comic Con last year, this convention included a number of sessions and panels with authors and artists. I wanted to sit in on a couple, but as it turns out, I dragged my youngest son to it, and he was only a little invested in it. Still, we made the rounds of the tables in an hour, and I bought a couple things. 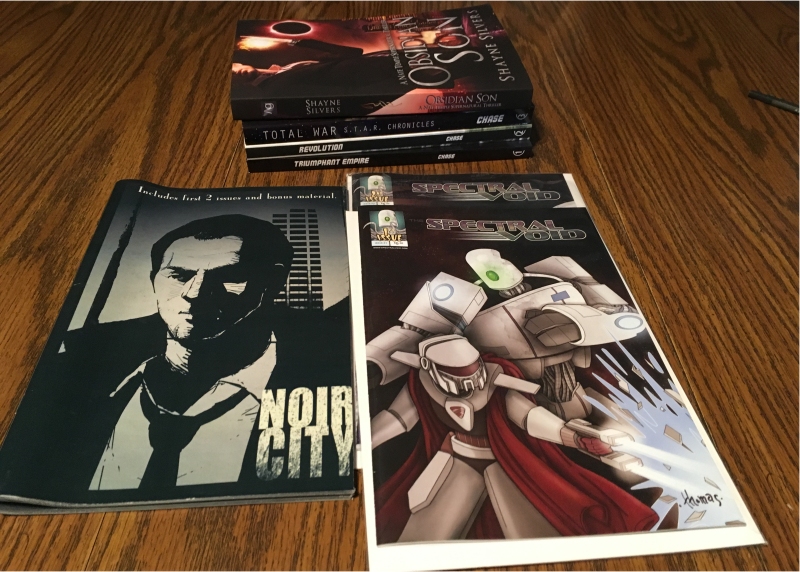 I’m a sucker for independent, self-publishers. So I got:

I also got for the boys a small bit of art with Spiderman and Deadpool (sorry to my comic book artist friend who hates it when people buy these) and a larger print from the artist who did Spectral Void. They also got a selection of Free Comic Book Day remainders that the Library was giving out.

You know, I enjoyed the pageantry of the convention and would have liked to sit in on those sessions as I mentioned. Perhaps I’ll make a greater effort to attend these sorts of things in the future.

Oh, and if you’re worried about me buying more comic books before completing my current goal of finishing all the others I already own, don’t worry–I only bought these three, and I’m down to a stack of about 20 New Mutants, a couple of Teen Titans, and a couple of other one-off things. So it’s not like I went and bought thirty old Battlestar Galactica issues (as I did at St. Louis Comic Con last year). I’m still on target to complete this life goal this year. Which will actually be the third–I guess you’ll have to hope for a year-end round up to see if I made it and to see what my other goals were.