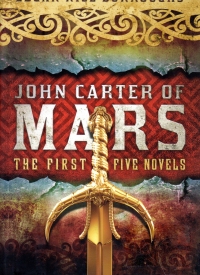 Earlier this year, Friar called John Norman’s work Burroughs pastiches, so I delved into this volume which I bought at Barnes and Noble (the version I read is the Barnes and Noble house brand, not the nice edition linked below). Well, Friar’s comment came to mind, but actually I picked up the book because I rented John Carter recently, and I wanted to compare it to the books. Which I had in a massive volume.

This book, 943 pages of sword novels and appendices/glossaries, includes the first five John Carter books: A Princess of Mars, The Gods of Mars, The Warlord of Mars, Thuvia, Maid of Mars, and The Chessmen of Mars. I read at least the first and the last already. The first (and perhaps the first couple) I read in high school or college, and I remembered little of them except the highlights. I know I read the last later in life, perhaps after college (but not in the last dozen or so years since I’ve been writing book reports on this blog, gentle reader) because I remember the paperback copy I have of it.

At any rate, a couple plot bits/summaries to help me remember in the future:

Reading them all together like this, I got a bit bored with the same tropes repeating book-to-book, and I thought things really slowed down and started repeating themselves in books four and five. With a bit more spacing out, it might be better.

I have another omnibus edition that has two of these books and another that I thought I could knock off quickly, but I’m not eager to jump into another Barsoom (the Burroughs name for Mars) story right away.

Taken in smaller doses, they’re a fun read, a bit of swashbuckling science fiction/fantasy adventure that holds up decently today if you can suspend disbelief of contemporary civilizations on Mars. Also, ageless Civil War veterans.

Books like this have outsized influence on generations of writers because they represent the kinds of fun things to read that you think might be fun to write. Unlike some of the things now, where most fiction is pretty ponderous and a single novel (Stephen King, I’m looking at you) might weigh in at this size.

At any rate, I enjoyed most of it for its own sake and for my own nostalgia.