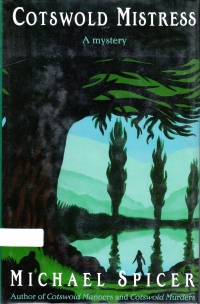 After reading John Carter of Mars, I was in the mood for something a little different. This is that.

It’s one of those thin British spy/detective novels, something short (159 pages) and droll. In it, Lady Jane Hildebreth, who works for a British government agency, is called upon by an American playboy and airplane designer acquaintance to attend a gathering at a rented estate in England. He brings up concerns that a couple of British engineers working to test his latest plane will die as many British engineers have recently. She pokes around, interviews a number of people, and eventually determines who in the British government might be responsible for their deaths and why.

As I mentioned, it’s a light bit of work, reminiscient of the sorts of things one got from the Doubleday Book Club three-to-a-volume in the 1960s.

As I was reading it, I told my beautiful wife that it helped if I heard the words in my head as though Elizabeth Hurley or Michelle Dockery were saying them. I feel like a bit of a traitor to my generation in that Michelle Dockery won out in the end. Perhaps it’s because I’ve seen Downton Abbey more recently than Bedazzled or Austin Powers: International Man of Mystery.

The author, a British Minister of Parliament, had several other books in the series (all bearing Cotwold in the title) by 1992. I’m not going to go hunting for them, but I won’t avoid them. I think I bought this particular volume at a book sale or on a sale table in the library a decade or more ago in St. Louis as the book bears the Ex Library markings of the St. Louis County Library.

And I learned where Cotswold is in England and that it’s famous for its stone and pottery while asking “Where the heck is Cotswold anyway?” So I’ve got that going for me.