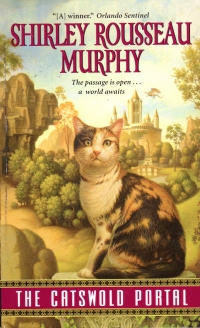 I picked up this book right after reading Cotswold Mistress because they had similar titles, and I figured reading them right after the other would lend itself to a certain symmetry. Or something. Besides, there would be no better time to read it than when I had the notion of reading the two similarly-titled books in succession.

I bought this book new with the proceeds of a gift card in 1998 or 1999, when the book was relatively new. I remember picking it up at the Barnes and Noble in Ladue, not far from my then-beautiful-girlfriend (note that the “then” here refers to the ‘girlfriend’ and not the ‘not now beautiful’ because she is now my beautiful wife and remains as beautiful or more beatiful now). Where was I before I was guarding my flank? Ah, yes. I bought this book back then because it had a cat on the cover, and I was a new cat owner. The back cover indicated the book involved a portal to a world of cats. So I thought it might be interesting.

And although I have picked it up a couple of times in those almost twenty years, I often found myself wondering if I was in the mood for a 400-page fantasy book about a portal to a cat world. And the answer was then “No.” But the similar titles to the two books gave me the push to get into it.

As I might have alluded, this is a fantasy world, but the portal does not lead to a world of cats; instead, it leads to a world that includes a race of shapeshifters who can turn into cats. In our world, there are a number of people of this race, but they don’t know it.

The main character, Melissa, is such a woman who was to be cultivated by an evil queen from the Netherworld to lure that shapeshifting race, the Catswold, into a trap. But as she was being taken through the portal, the queen’s henchman was ambushed by a rebel woman who then used magic to make Melissa forget her past and the upper world and then who raised her as a peasant. Melissa, though, is drawn to her destiny at the castle of the evil queen where the king has an agenda of his own and beds Melissa to produce an heir to the kingdom, cementing his position. When the queen discovers this tryst, she turns Melissa into a cat and has her dumped in the outer world. There, the widower of Melissa’s childhood friend Alice is a painter who has lost his creative spark finds a cat and then a new model in a mysterious woman (Melissa, who is still trying to learn about her past).

At any rate, it’s high fantasy with a lot of intrigue, a lot of subplots, and a lot of textured writing throughout 300 pages. Around that time, though, the focus shifts into narrative overdrive, and we get to the end and the resolutions with a couple flashes of the textured writing. Plotlines slowly developed are abandoned or dealt with in a paragraph. It’s almost as though the author thought initially of a trilogy or pair of books or a longer book, but got toward the end and just wrapped it all up. As late as about page 300, elements were being introduced. Elements that would seem to be major elements–like a giant black dragon from the Hell Pit that represents the fundamental evil in all worlds and universes. There’s no way this finishes in 100 pages, I thought. And it did. And the black dragon gets a two paragraph send-off.

So it’s a pretty good bit of high fantasy that finishes too quickly for its own good.

Did it really take me two weeks to read one book? Well, yes; it is high fantasy with deep, rich writing as I said, and I’m spending a little less time reading these days. Hopefully I’ll complete my next read in a shorter interval. Spoiler alert: It has a completely unrelated title.