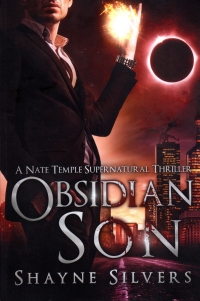 As you might remember, I bought this book in August at LibraryCon. You know, I like to support self-published authors whom I find sitting at tables at conventions and in the library from time to time, but when it comes time to reading the books, I tend to be a little reluctant. A couple of the self-published efforts I’ve tried have been a little lackluster (ahem), and I’ve put them back on the to-read shelves. And I picked up this one.

Well. This was pretty good.

It’s an urban fantasy book featuring a protagonist wizard, the child of great wizards who are also billionaire businesspeople. The book starts right after their murders, where the hero (Nate Temple, for whom the series is named) owns a book store but might have to take control of his parents’ company. He specializes in finding esoteric works, and he’s commissioned to find a book that is drawing a lot of interest all of a sudden. It’s tied to dragons, creatures who generally remain hidden from public view, and Temple finds himself, his friends, and a growing circle of other Freaks working to prevent a power-hungry dragon from seizing power during a solar eclipse.

It’s set in St. Louis, but it doesn’t ride that too hard (you won’t be able to, say, drive a cab based on the text). It has a couple of place names, but that’s mostly it. Not even as much as an Anita Blake novel. Well, an early one, anyway, as I abandoned that series, what, twenty years ago?

You know, I liked it better than the Jim Butcher book I read a couple years ago. Of course, as this is the first of the series, it’s fresh and setting up the urban fantasy world and the team I presume will appear in later books of the series. Which might get as bogged down in Series Business as any series does. But this is the first, so it is without that baggage. Perhaps I should stick with only the first book or two of a series to keep that freshness.

At any rate, worth a look if you’re into urban fantasy. I’ll probably pick a copy up for my nephew, so that will be two copies of this book I will have bought…. boughten? What verb tense is that?