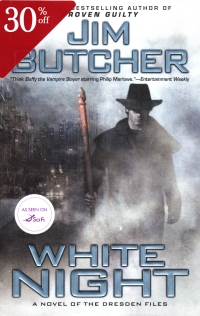 I got this book in October, and when I was looking for something sort of escapist to work into my rotation, it was right there atop the stack.

This is the ninth book in the Dresden Files series, which is indeed about a powerful gun-toting hard-boiled wizard. In this volume, the wizard is looking for someone who is killing witches. While dressed up in his usual clothing. Some clues indicate his brother might be involved. His brother is a vampire, you see, but not a blood-sucking vampire. Instead, he feasts upon the emotions of his victims.

So the book starts out with the current crime and details and starts working us into the case, but just as suddenly it veers into Series Business. Characters from previous books and plotlines impact what’s going on. Of course, the houses of the vampires are politicking and manuvering against each other. Then there’s a mysterious figure whose identity is not revealed at the end, which means that’s something for a later book.

So it’s an interesting conceit–not unlike Hard Magic. But the Series Business distracts me and emphasizes that I’m an outsider to this series, not someone who’s been with it from the beginning. And I think it detracts from the current book’s plot some. It’s not only this book, gentle reader; as you know, I often complained about Robert B. Parker’s later books for the same reason. In the middle 1990s, I started the Anita Blake series by Laurell K. Hamilton, but I dropped out after book five or six (of apparently 21 by now) because so much of the business in each book deals with characters and plots from other books. You don’t get much of that at all in classic pulp, but I guess the modern publishing world relies on the brandification of series and this sort of thing solidifies the connection with recurrent readers. But I don’t like it.

At any rate, reading Butcher’s bio indicates his path to becoming a published writer (and apparently a better-selling author than Larry Correia. He wrote and wrote and submitted and finally started doing conferences where he met…. Laurell K. Hamilton. And his career was on track. It’s pleasing to read of hard work leading to success.

But in a final reflection on the book: I’ll take others in the series if I find them easily, but I’m not going to go buy them new for myself or specifically looking for them at used book stores or book sales. I did, however, buy the first two in the series for my nephew (the same one I got the Correia books for a couple years back). So I did put a couple pennies in Butcher’s kitty which is more than I do for most authors I read these days.

Oh, and this book is the second one I’ve read this month that was originally sold at a Border’s (Blog being the other). I hadn’t thought of that book store in a while. I remember a time when there were a bunch of big book stores like that in St. Louis and here in Springfield. We’re still lucky enough to have a free-standing Barnes and Noble that’s only half-given over to Nooks and toys, and I only get in there three or four times a year. Sadly, I have enough to read without hitting a new book store frequently.