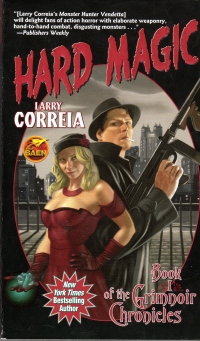 I got this book as a Christmas gift for my nephew this year along with the mass market paperback of its sequel Spellbound. Only after I received them did I check my Amazon history and discover that I gave my nephew Hard Magic last year, which means this was an inadvertent display of the One for you, one for me gift protocol.

I’ve read Larry Correia’s blog for some time, and although his books sounded interesting, it took an accident like this (or the eventual appearance of them at book fairs) for me to get a hold of one and to read it. And I liked it.

The book is a fantasy alt-history where Magic was discovered in the late 18th or early 19th century. Individuals tend to have an aspect of magic, such as gravity control, personal density control, telekinesis, and so on. Most have only one power, and some are stronger than others.

In this world, a secret society of magicians are working to keep a super weapon out of the hands of the Imperium, the Japanese expansionist government. The action takes place in the 1930s of this other history, and the main character is an ex-con war hero. As part of his release from prison, he’s supposed to help the FBI apprehend wanted magic-users, and his last assignment is to help apprehend a woman he’d known before going inside. That snatch turns bad, but it puts him in touch with the secret society, and he becomes embroiled in their intrigues.

The pacing and tone reflects that of higher pulp, but its length and the number of jump scenes and sub or hidden plots reflect a modern thriller sensibility. It moves along better than some of the ponderous longer works, though, so I finished it in shorter time than some shorter works.

And with greater pleasure.

I read a lot of low pulp, men’s adventure novels, and this book contrasts starkly to them. Where they’re set pieces with set explosions and gunplay amongst stock scenes and characters, there’s real imagination in this book and so much novelty that I’ll remember its plot and schtick better than individual Mack Bolan books, say, where Mack goes somewhere and infiltrates/blows up some Mafia hardmen and the city name in the title is the only differentiating factor.

So I won’t turn down gifts of other Correia books, and if I find them in a book fair, I’ll pounce on them. Or maybe next year, I’ll “accidentally” pick more duplicates for my nephew.

And whereas I used to want to write pulp fiction akin to Robert B. Parker, Mickey Spillane, the MacDonalds, and whatnot, I think I’ll aspire to better things and more memorable books.

Also, if you dreamed of being a writer when you were a kid, check out Correia’s blog or Marko Kloos’s blog to get a glimpse of the life of successful writing you imagined. There’s work involved, and success.