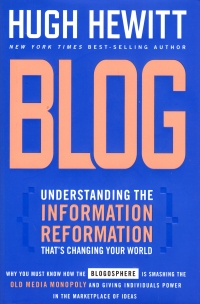 This book was a mighty big deal back in the day when it came out. Bloggers were talking about it, Hugh Hewitt was talking about it. Of course, I didn’t talk about it then because I didn’t get the book fresh off the presses. I don’t tend to get my current events books new unless I get them as a gift; even then, I don’t tend to get right to them because, man, I’ve got 1960s science fiction and/or pulp paperbacks to read, man.

So, what is this book? It’s Hewitt cashing in on the relatively new blogging trend that really reached a crescendo around the 2004 election. Dude, even I was live-blogging presidential debates and nominating conventions. Although I thought blogging would be a good way to get myself writing regularly rather than a way to make money (although in those days, who knew how far you could go?) The book is pretty short; although it is 222 pages, it’s really only 156 pages of new material and then sixty pages of Hewitt’s previous columns on the topic and a number of comments from his Web site.

It’s a quick hitter “aimed” at businessmen who need to know about blogs and what they can do to a business, both positively and negatively. He thumps the washbin about executives hiring Glenn Reynolds, the Powerline guys, Ed Morrissey, and other leading lights as consultants. And it paints a fairly rosy picture of blogs.

Ten years later, most of the people he mentioned as leading lights are still leading lights, or at least bloggers I still read. There’s been a lot of consolidation in the industry, so the aggregate blog trumps individual blogging as far as the amount of noise they can raise. And the microblogging (Twitter) and social media trends quickly overwhelmed blogging, as it’s easier and more accessible to individuals to put up a pithy short sentence than to write what amounts to a short, coherent essay from time to time.

So in 2015, the book is a historical document relevant mostly for its place and moment in the history of online communication. I suppose you could read it and replace the word “blog” with “social media” and get something out of it, but there are probably more modern books on the theme all looking to make a quick two bits on explaining the current state of the Web, and they all come with an expiration date of about two weeks from now.

Strangely enough, though, I got the most out of the early comparison to the Protestant Reformation–in the early going, he likens the rise of Web logs to the changes in communication that made the Reformation possible and how the blogs paralleled it. So it has a history of the Reformation and the rise of printing in it, and I liked that.

At any rate, it might be worth your time if you haven’t read it already.