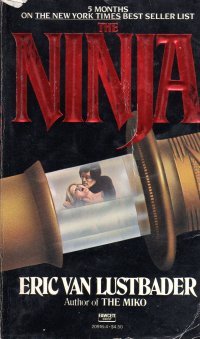 But is it sprawling? Oh, boy, Mister, is it!

All right, so the plot: A guy from an ad agency has quit and is living in the suburbs when a neighbor dies from what looks to be an accident, but a World War II veteran medical examiner finds traces of metal in a puncture wound, reminding him of an experience in World War II when he met the ninja. Our hero, Nicholas Linnear, is really a ninja! Spoiler alert, but, c’mon, man, the “twists” are pretty obvious as we go along. He meets the modern love interest, the daughter of a tycoon, soon after the murder (who turns out to be a former co-worker of Linnear). He becomes involved with her, but we also get long, vivid flashbacks of his upbringing in post World War II Japan by an English (Jewish) father and a Chinese mother (who might not be his real mother).

So we’ve got the past and the present interwoven; in the present, we have the good ninja agreeing to guard the tycoon from assassination by the ninja and collaborating with the local medical examiner and talking with some of his Japanese friends in New York, and they’re all systematically killed by the bad ninja, leading the good ninja to realize that maybe the bad ninja is targeting him as much as the tycoon. Whoa! And in a twist you can see hundreds of pages in advance, the bad ninja is his cousin! Or is he really Nicholas’s brother?

And then we go into a flashback of Nicholas’s young life in Japan, with some Nipponophilia and Japanese history worked in along with his love for a Japanese girl, Yukio, who might be playing him for a fool and in the service of his cousin, a student at the same ryu as Nicholas until Nicholas beats him–at which time he goes to a black school to learn the dark arts of bujistu. To be honest, a lot of words in the book are italicised to emphasize their exotic flavor.

But the backstories–each character gets his or her pages or paragraphs, if only to flesh out a character to be killed later–really chonk this book up. I mean, it goes into greater detail about the characters than classical literature which often weighs in at 500 pages or more. But I prefer my genre fiction a little punchier, and this book could have lost probably half of its words to tighten it up.

Oh, and the book is broken into five sections–rings based on The Book of Five Rings, and the author is name checked a bunch. I felt smaht for knowing this as I read the book earlier this year.

At any rate, not my kind of “thriller.” Overly long and wordy. I will probably not bother with the rest of the series which spans six novels through 1995 and two e-book short stories in 2014 and 2016.

Definitely the second-best book entitled The Ninja that I’ve read recently (The Ninja and Their Secret Fighting Art, which I read in 2019, was the best–I was surprised to see I already had an image called theninja.jpg for book reports).