It’s been a while since I’ve had a little time to kill by my youngest son’s school, but his archery practice let off an hour and a half before the basketball games, so we scarfed some McDonalds. Which did not kill an hour and a half. Fortunately, Hooked on Books, almost across the street, is open until six, so we got a chance to browse.

Of course, I hit the dollar/fifty cent books in front of the store. In the dark, since it was 5:30. And then I hit the dwindling dollar books room in the back. And the cart of cheap books at the end of the mystery section. They haven’t moved them.

However, I did pick out a couple of art monographs and a philosophy comic book at full price. I happened to be in the philosophy section looking for some Leibniz, but, c’mon, man, this is the 21st century. No used bookstores not located on university campuses are going to have source material from the seventeenth century.

At any rate, here is what I got: 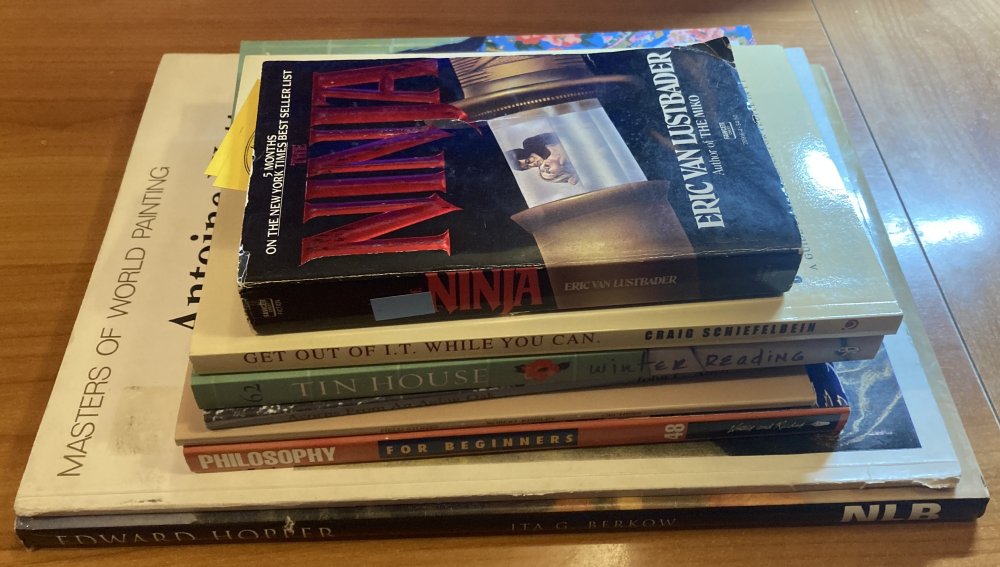 As I stacked the books on my to-read shelves atop other books, I thought, Man, I need to read more. I have only been getting in an hour some nights as we handle the boys’ activities and whatnot. Of course, in a couple of years, I won’t have to keep one ear open all night for the boys, so I will have time for projects and reading and whatnot. And I will be both happy and sad.